The last three weeks delivered increasing mortgage rates and the coming week is shaping up to be a repeat. What’s behind this negative break from the summer doldrums rates have languished in is a steady sign that inflation is substantially above the Feds target of 2%. The latest CPI 4-week average came in barely below expectations (2.7% vs. 2.8%), while jobless claims, at 208K, are at a 46 year low.

The Fed released the latest version of the Beige Book this week as well, highlighting a stable outlook for the US economy, the lack of both high and low skilled workers in the labor shortage, and stated expectations for moderate growth in the economy despite the tariff situation. Wage inflation is still a focus for the Fed, even though wages are not moving up as expected after the tax cuts earlier this year.

Although Mortgage Backed Securities are trading in a very tight channel – the speculating reports about the possibility of another round of trade talks with China have helped to keep the market somewhat stable. Most of the impact of the economic data is being absorbed slowly by the markets and is producing a milder effect overall.

This candlestick chart below covers the past weeks’ Mortgage Backed Securities (MBS) activity and the impact on interest rates. MBS directly impact mortgage rates, and the days with red indicate higher rates and those with green – lower rates. 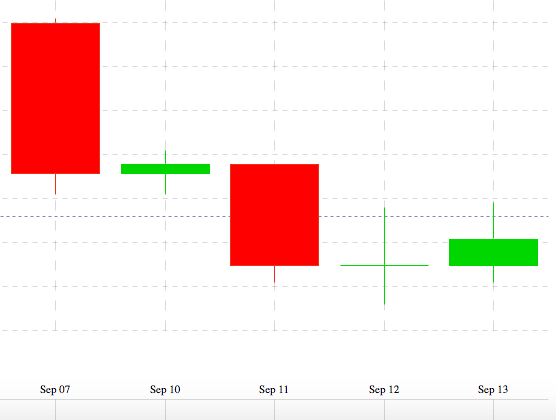 This week’s Mortgage Banking Associations’ (MBA) weekly rate survey shows effective rates increased for all loan products, with the exception of the 5/1 ARM which decreased slightly. The information below applies to all loans with an 80% loan-to-value.

Per the MBA weekly survey: “The average contract interest rate for 30-year fixed-rate mortgages with conforming loan balances ($453,100 or less) increased to 4.84 percent from 4.80 percent, with points increasing to 0.46 from 0.43 (including the origination fee.)

“The average contract interest rate for 30-year fixed-rate mortgages with jumbo loan balances (greater than $453,100) increased to 4.72 percent from 4.67 percent, with points increasing to 0.47 from 0.30 (including the origination fee.)”

“The average contract interest rate for 15-year fixed-rate mortgages increased to 4.28 percent from 4.23 percent, with points increasing to 0.47 from 0.45 (including the origination fee.)”

“The average contract interest rate for 5/1 ARMs decreased to 4.07 percent from 4.09 percent, with points decreasing to 0.30 from 0.31 (including the origination fee.)”

Bankrate’s weekly survey of mortgage and economic experts, countrywide, shows a majority (58%) predicting interest rates will increase this coming week (plus or minus two basis points), while 25% predicting rates will decrease. The remaining 17% expect interest rates to remain unchanged next week.

My prediction is that rates will go up this week, as quoted in the Bankrate report, “Rates will move up. After predicting stable interest rates for several weeks, I predicted the rates to move up last week, and I am doing so again this week. There is a boatload of strong economic data that are increasing the yield on 10-year Treasury note which is directly co-relational to increase in mortgage rates. First, there was strong jobs data on Friday and now the small business sentiment index is reaching a record. Add to that the number of unfilled jobs touching a new high and upbeat expectations on a trade talk; you get a perfect storm to pressure the mortgage rates higher.”

The chart below, from Freddie Mac’s weekly mortgage survey, shows conforming rates increased over the last week, September 7th to September 13th, for 30Y fixed, 15Y fixed and the 5/1 ARM. This is in contrast to the slight decrease reported by the MBA and shown above. 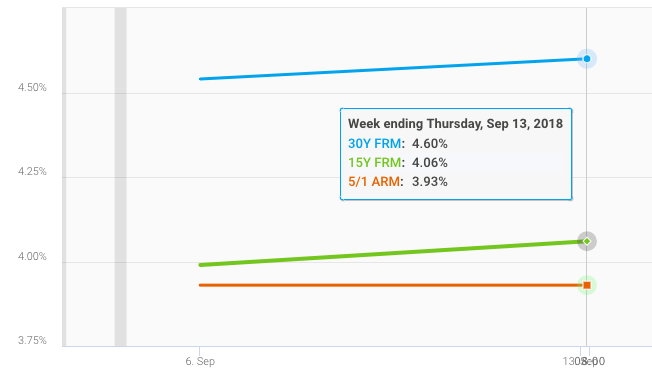 Mortgage rates are currently 0.82 percent higher than a year ago, which is the biggest year-over-year increase since May 2014. Looking ahead, annualized comparisons for mortgage applications may look weaker than they appear, but that’s primarily because of the large spread between mortgage rates now and last September, which was when they reached their low for the year.

Overall, this spectacular stretch of solid job gains and low unemployment should help keep homebuyer interest elevated. However, mortgage rates will likely also move up, as the Federal Reserve considers short-term rate hikes this month and at future meetings.”

The increasing rates for the last few weeks are expected to continue into next week. If you are in a position to close on a mortgage in the next 45-60 days, lock in a rate as soon as you have a signed contract to purchase. The same is true for refinances, which can be locked in at the time of application.