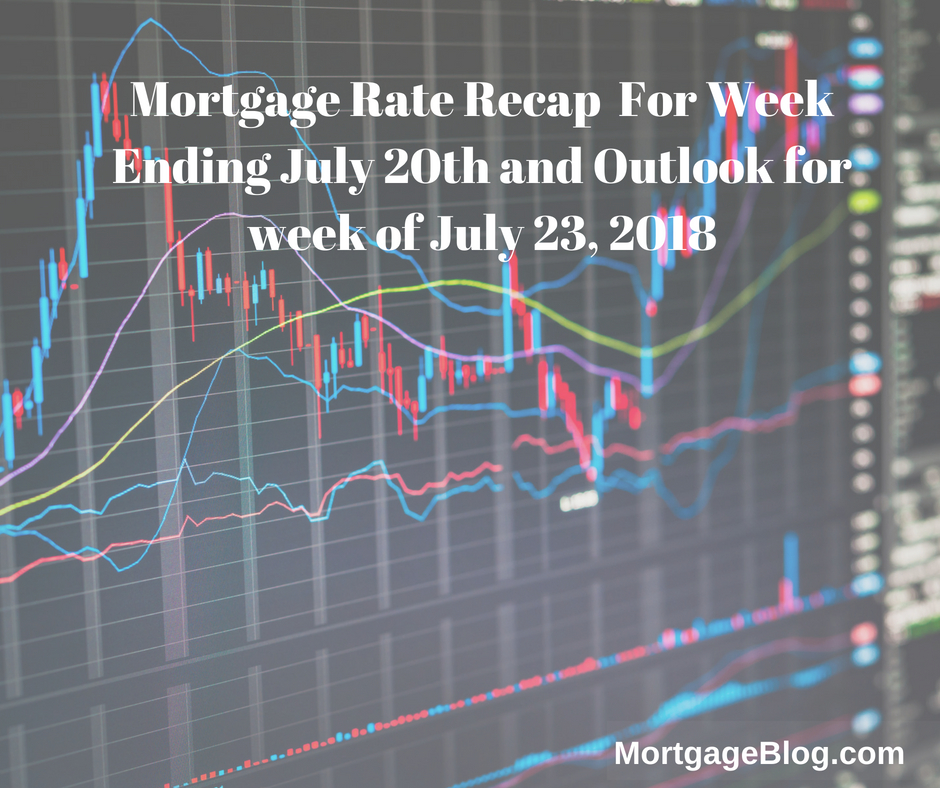 Mortgage rates finished up another week at almost the same point that they began.  It’s been a stagnant two+ months for rates, and it doesn’t appear to be breaking out of that pattern soon. All the recent economic data continues to point to building inflation, primarily due to a severely tight labor market. Jobless claims announced this week were not only below predictions, but they hit a 60 year low.

Federal Reserve Chairman Jerome Powell testified before the House this week, but his bias and policies are consistent, with no new information to impact the markets.  The Feds’ Beige Book was also released this week and included more data and concern over the tight labor market, with slightly less concern over tariffs as was evident in the spring.

Economic news will be light for today, July 19th and no data is expected to be released on the 20th, leaving little to impact mortgage-backed securities and interest rates. The impact of tariff driven price increases and rising inflation is not moving the market currently, but their effect is inevitable. The question is when it will hit.

This candlestick chart below covers the past weeks’ Mortgage Backed Securities (MBS) activity and the impact on interest rates. Overall, rates moved up slightly with the exception of a small decrease for 5/1 ARM’s, as seen in the candlestick chart below. MBS directly impact mortgage rates, and the days with red indicate higher rates and those with green – lower rates. 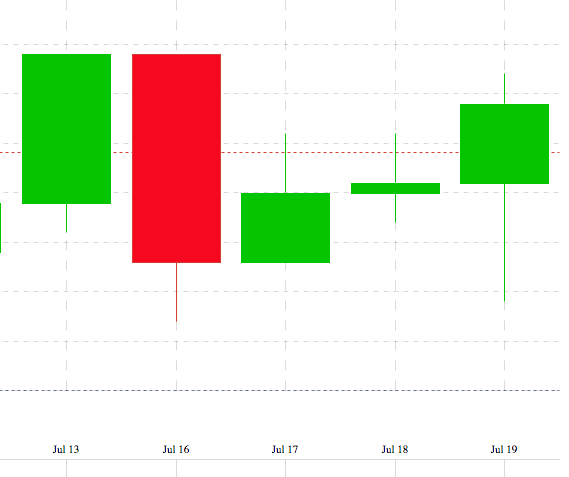 This week’s Mortgage Banking Associations’ (MBA) weekly rate survey shows effective rates increased slightly for all loan products except the 5/1 ARM. The information below applies to all loans with an 80% loan-to-value.

Per the MBA weekly survey: “The average contract interest rate for 30-year fixed-rate mortgages with conforming loan balances ($453,100 or less) increased to 4.77 percent from 4.76 percent, with points increasing to 0.46 from 0.43 (including the origination fee.)”

“The average contract interest rate for 30-year fixed-rate mortgages with jumbo loan balances (greater than $453,100) decreased to 4.66 percent from 4.68 percent, with points increasing to 0.30 from 0.24 (including the origination fee.)”

“The average contract interest rate for 15-year fixed-rate mortgages increased to 4.22 percent from 4.18 percent, with points decreasing to 0.42 from 0.46 (including the origination fee.)”

“The average contract interest rate for 5/1 ARMs decreased to 4.12 percent from 4.13 percent, with points increasing to 0.39 from 0.36 (including the origination fee.)”

Bankrate’s weekly survey of mortgage and economic experts, countrywide, shows the majority (75%) predicting interest rates will remain stable this coming week (plus or minus two basis points), and 25% predicting they will fall. None of the experts in the survey expect interest rates to increase next week.

My prediction is that rates will remain stable this week, as quoted in the Bankrate report, “Mortgage rates have been a real yawner for the last six weeks or so. That’s not such a bad thing after running rampant at the beginning of the year. There isn’t much this week that should change any of that. Fed Chairman Jerome Powell’s comments to Congress were very much along expected lines with no surprises. With that out of way and no other market-moving report on the anvil, mortgage rates should see another week of very little to no change.”

The chart below, from Freddie Mac’s weekly mortgage survey, shows conforming rates were relatively flat over the last week, July 12th to July 19th, for 30Y fixed, 15Y fixed and the 5/1 ARM. 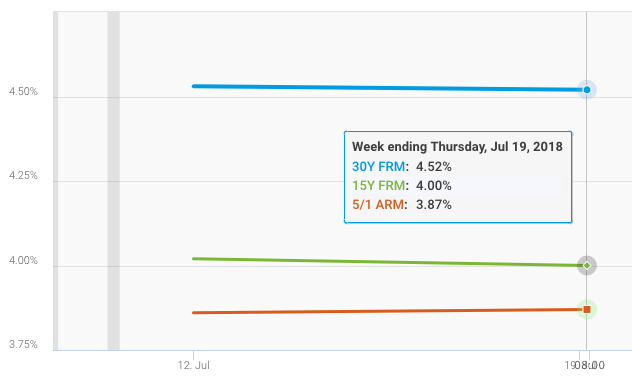 Manufacturing output and consumer spending showed improvements, but construction activity was a disappointment. This meant there was no driving force to move mortgage rates in any meaningful way, which has been the theme in the last two months. That’s good news for price sensitive home shoppers, given that this stability in borrowing costs allows them a little extra time to find the right home.”

While experts predict there’s a 25% chance of rates improving slightly next week, the benefit may not be significant enough to offset the risk inherent in floating. Ultimately – with little to gain from floating, if you’re planning on closing a loan in the next 30 days, locking in a rate now is the best option.