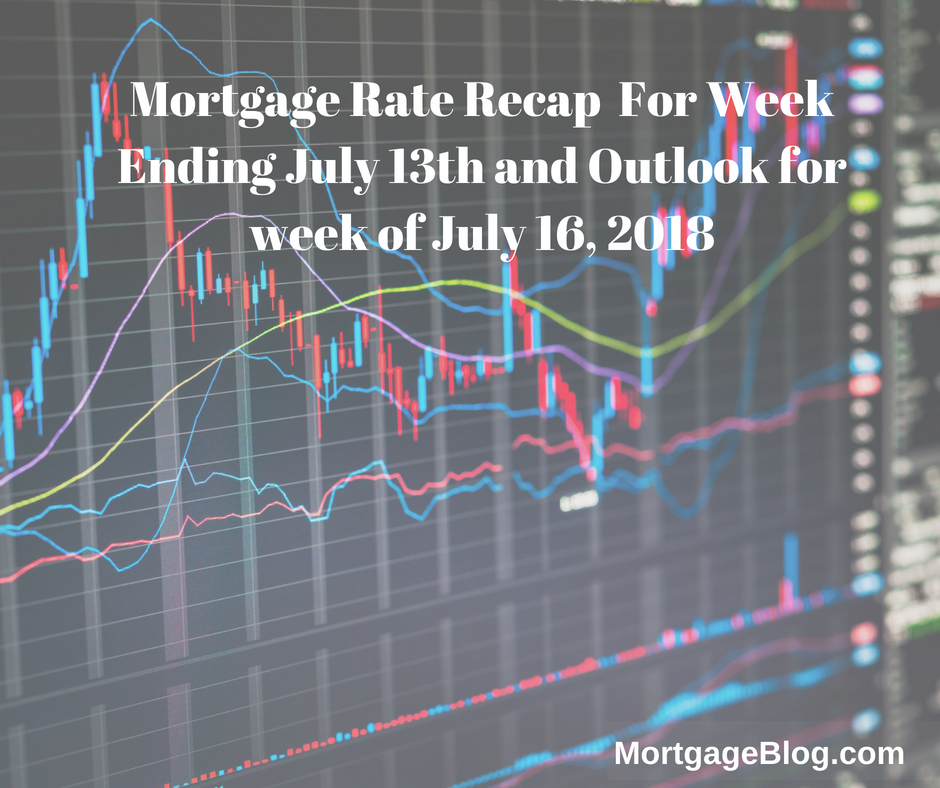 Overall, despite steady inflationary trends in economic data (Consumer Price Index hit the highest level since 2012), the threat of trade wars is keeping a large portion of investor funds in the US long-term bond market. Without an influx of additional investor dollars into US Bonds, there’ll be no noticeable improvement in mortgage rates.

While the market also watched for results from the NATO summit, now that it’s ended – nothing concrete came from it (the 2% spending level for all member nations was already in the 2014 budget) and attention remains focused on the increasing threat of a  US-China trade war.

In contrast to early 2018, Interest rates are in the ‘doldrums’ and without something catastrophic (like a North Korean missile?) or strongly positive occurring globally, things don’t look to change soon.

This candlestick chart below covers the past week’s Mortgage Backed Securities (MBS) activity and the impact on interest rates. Overall, rates decreased slightly, as seen in the candlestick chart. MBS directly impact mortgage rates, and the days with red indicate higher rates and those with green – lower rates.

This week’s Mortgage Banking Associations’ (MBA) weekly rate survey shows effective rates decreased slightly for all loan products, with the exception of the 5/1 ARM, for all loans with an 80% loan-to-value.

Per the MBA weekly survey: “The average contract interest rate for 30-year fixed-rate mortgages with conforming loan balances ($453,100 or less) decreased to 4.76 percent from 4.79 percent, with points increasing to 0.43 from 0.41 (including the origination fee.)”

“The average contract interest rate for 30-year fixed-rate mortgages with jumbo loan balances (greater than $453,100) decreased to 4.68 percent from 4.71 percent, with points decreasing to 0.24 from 0.43 (including the origination fee.)”

“The average contract interest rate for 15-year fixed-rate mortgages decreased to 4.18 percent from 4.22 percent, with points decreasing to 0.46 from 0.47 (including the origination fee.)”

“The average contract interest rate for 5/1 ARMs increased to its highest level in the history of the survey, 4.13 percent, from 4.03 percent, with points increasing to 0.36 from 0.25 (including the origination fee.)”

Get Customized Mortgage Rate Quote for Refinance or Home Purchase

Bankrate’s weekly survey of mortgage and economic experts, countrywide, shows the majority (58%) predicting interest rates will remain stable this coming week (plus or minus two basis points), and 33% predicting they will increase. The remaining 8%, however, expect interest rates to decrease next week.

My prediction is that rates will remain stable this week, as quoted in the Bankrate report, “Weekly fluctuations aside, mortgage rates are almost at the same level they were three months back which is quite in contrast to the first three months of the year when the rates kept climbing. Competing factors have kept mortgage rates from rising in the recent weeks. June Producer Price Index came in at 3.4 percent — the highest level since 2011. This would typically push rates higher, but we have the constant talk of the trade war that is balancing the inflation report. With the NATO meeting also thrown in the geopolitical mix, expect mortgage rates not to change much this coming week.”

The chart below, from Freddie Mac’s weekly mortgage survey, shows conforming rates either decreased slightly over the last week, July 6th to July 12th, for 30Y fixed, 15Y fixed and the 5/1 ARM.

Freddie Mac’s weekly mortgage survey noted, “Mortgage rates were mostly unchanged, but did tick up for the first time since early June.

The 10-year Treasury yield continues to hover along the same narrow range, as increased global trade tensions are causing investors to take a cautious approach. This, in turn, has kept borrowing costs at bay, which is certainly welcoming news for those looking to buy a home before the summer ends.

A record number of people quit their job last month, most likely for a new opportunity with higher wages and better benefits. This positive trend, along with these lower mortgage rates, should increasingly give some previously priced-out prospective homebuyers the financial wherewithal to resume their home search.”

Get a Live Personalized Rate Quote

Lock your rate in if you’re planning on closing a loan in the next 15-30 days. The stagnant markets don’t offer much of an upside gain if you float, and the risk of the markets reacting to a steady 2%+ inflation is present. The bottom line – floating is a gamble with little hope for the reward of a significantly lower rate.