Without any market-moving economic reports, mortgage-backed securities continue to perform as they have for weeks, with no change in sight. The job market remains strong, with unemployment at historically low levels – as in 48 year low.

The only event on the global front that has had an impact on the markets is the collapse of Turkey’s currency, and that was a minor market mover. Although it did create some flight to safety into US bonds, there was no significant impact on mortgage rates (see the chart in the section below.)

It’s notable that housing starts are low in the starter home price range.  With labor costs, land costs, and material costs prohibitive for building at that price range. Also, China and the US will be meeting to hold ‘talks about trade talks’ in the coming weeks, but nothing is expected to result from the meetings. Overall, the market looks locked into the months-long doldrums it’s held all summer, with no relief in sight.

This candlestick chart below covers the past weeks’ Mortgage Backed Securities (MBS) activity and the impact on interest rates. MBS started the week at 101.81 and closed out the week at 101.75, which is exactly where they closed the previous week. MBS directly impact mortgage rates, and the days with red indicate higher rates and those with green – lower rates. 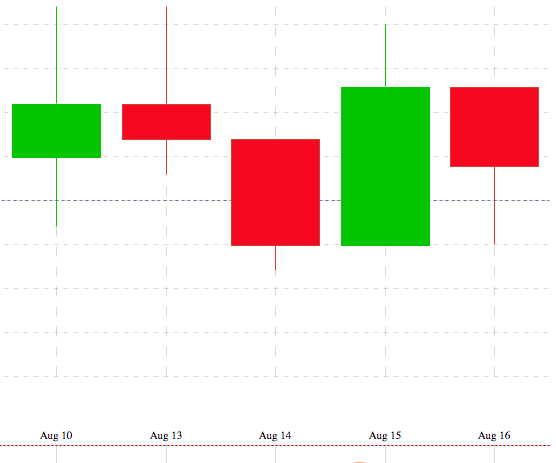 This week’s Mortgage Banking Associations’ (MBA) weekly rate survey shows effective rates decreased slightly for all loan products, with the exception of the 30-year fixed products. Conforming 30-year fixed and the Jumbo 30-year fixed decreased in rate and in points, so the effective rate decreased from the previous week. The information below applies to all loans with an 80% loan-to-value.

Per the MBA weekly survey: “The average contract interest rate for 30-year fixed-rate mortgages with conforming loan balances ($453,100 or less) decreased to 4.81 percent from 4.84 percent, with points decreasing to 0.43 from 0.45 (including the origination fee.)”

“The average contract interest rate for 30-year fixed-rate mortgages with jumbo loan balances (greater than $453,100) decreased to 4.73 percent from 4.74 percent, with points decreasing to 0.29 from 0.39 (including the origination fee.)”

“The average contract interest rate for 15-year fixed-rate mortgages increased to 4.27 percent from 4.26 percent, with points increasing to 0.52 from 0.48 (including the origination fee.)”

“The average contract interest rate for 5/1 ARMs decreased to 4.06 percent from 4.07 percent, with points increasing to 0.48 from 0.42 (including the origination fee.)”

Get a Rate Quote for your Home Purchase or Refinance

Bankrate’s weekly survey of mortgage and economic experts, countrywide, shows the majority (67%) predicting interest rates will remain unchanged this coming week (plus or minus two basis points), while 22% predicting rates will increase and 11% expect interest rates to fall next week. 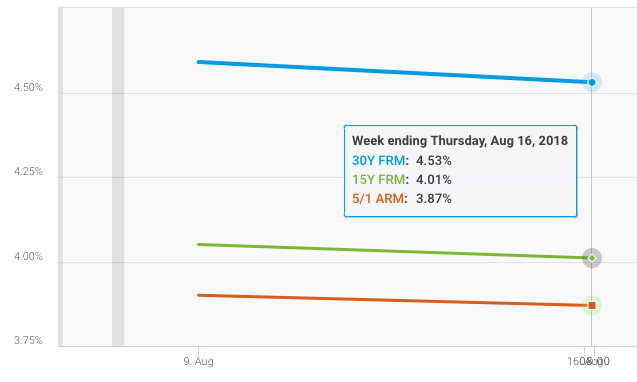 Freddie Mac’s weekly mortgage survey noted, “Mortgage rates remained mostly flat over the past week, which has been the dominant theme since late spring.

This stability in borrowing costs comes despite the highest core inflation rates since 2008 and turbulence in the currency markets. Unfortunately, this pause in rates is not leading to increasing home sales.

Purchase mortgage applications trailed to a year ago levels again last week, and it’s clear in some markets that the combination of ascending home prices, limited affordable inventory and this year’s higher rates are curtailing homebuyer demand.”

Lock in your interest rate as soon as possible if you’re closing in the next 30-45 days, as no changes in the market are expected to improve rates. Get a rate quote today!