Mortgage rates have virtually treaded water for the summer, and it looks like that pattern will continue at least for another week.  At this point, nearing the end of the week of July 23rd, the economic data released was Durable Goods and the Weekly Jobless claims, and both came in at expected levels. Friday’s GDP report is expected to come in at or above 3%, and the bond market will react negatively as it doesn’t like anything at or above 3% for the GDP. There is a risk that this will bring an increase in rates.

As the European Union and the US hashing out some trade negotiations and suspended tariffs, the markets showed little reaction to the results of the meeting.

The only other activity in global markets is a rubber stamp from the European Central Bank as they kept their rates unchanged and issued the same statement they’d released in their last meeting. Outside of any surprises globally, the markets appear destined to remain in the same pattern for some time.

Get a personalized mortgage rate quote

This candlestick chart below covers the past weeks’ Mortgage Backed Securities (MBS) activity and the impact on interest rates. Overall, rates moved up slightly except for the 30-year fixed conforming which was unchanged and another small decrease for 5/1 ARM. MBS directly impact mortgage rates, and the days with red indicate higher rates and those with green – lower rates. 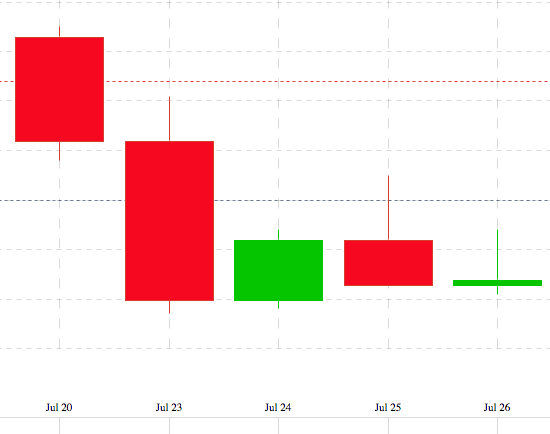 This week’s Mortgage Banking Associations’ (MBA) weekly rate survey shows effective rates increased slightly for all loan products except the 5/1 ARM. The information below applies to all loans with an 80% loan-to-value.

Per the MBA weekly survey: “The average contract interest rate for 30-year fixed-rate mortgages with conforming loan balances ($453,100 or less) remained unchanged at 4.77 percent, with points decreasing to 0.45 from 0.46 (including the origination fee.)”

“The average contract interest rate for 30-year fixed-rate mortgages with jumbo loan balances (greater than $453,100) increased to 4.72 percent from 4.66 percent, with points increasing to 0.31 from 0.30 (including the origination fee.)”

“The average contract interest rate for 15-year fixed-rate mortgages increased to 4.23 percent from 4.22 percent, with points increasing to 0.44 from 0.42 (including the origination fee.)”

“The average contract interest rate for 5/1 ARMs decreased to 4.09 percent from 4.12 percent, with points decreasing to 0.29 from 0.39 (including the origination fee).”

Bankrate’s weekly survey of mortgage and economic experts, countrywide, shows the majority (55%) predicting interest rates will remain increase this coming week (plus or minus two basis points), and 36% predicting they will be unchanged. A small percentage of the experts (9%) expect interest rates to fall next week.

My prediction is that any movement in rates will be insignificant this week, as quoted in the Bankrate report, “Other than weekly fluctuations, mortgage rates have remained broadly the same for the last three months. Trade wars and talks of it have actually helped the mortgage rates remain stable after the sudden spike earlier in the year. On that topic, the meeting between EU President Jean-Claude Juncker and U.S. leaders may be significant. However, I don’t expect that to impact the mortgage rates much. Any movement this week will be insignificant.”

The chart below, from Freddie Mac’s weekly mortgage survey, shows conforming rates were relatively flat over the last week, July 12th to July 19th, for 30Y fixed, 15Y fixed and the 5/1 ARM. 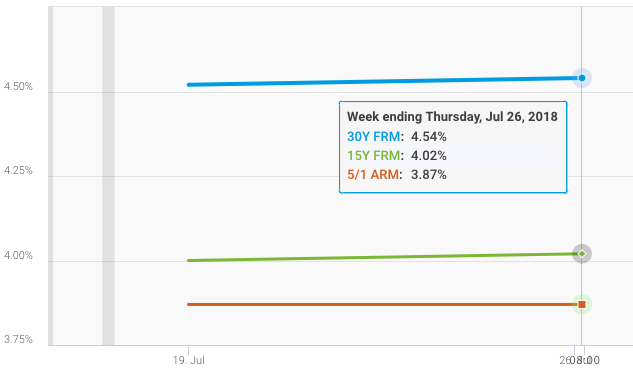 Freddie Mac’s weekly mortgage survey noted, “Mortgage rates moved up slightly over the past week to their highest level since late June.

The next few months will be key for gauging the health of the housing market. Existing sales appear to have peaked, sales of newly built homes are slowing and unsold inventory is rising for the first time in three years.

Meanwhile, affordability pressures are increasingly a concern in many markets, as the combination of continuous price gains and higher mortgage rates appear to be giving more prospective buyers a pause. This is why new and existing-home sales are not breaking out this summer despite the healthy economy and labor market.”

With minimal upside to the markets over the last few months, there has been little to no incentive to not lock in an interest rate immediately for anyone looking to close a loan within a 60-day period. While that condition is likely to continue, if you’re looking to close in the next 15-30 days, recommend you lock in today before the release of the GDP on Friday, July 27th.