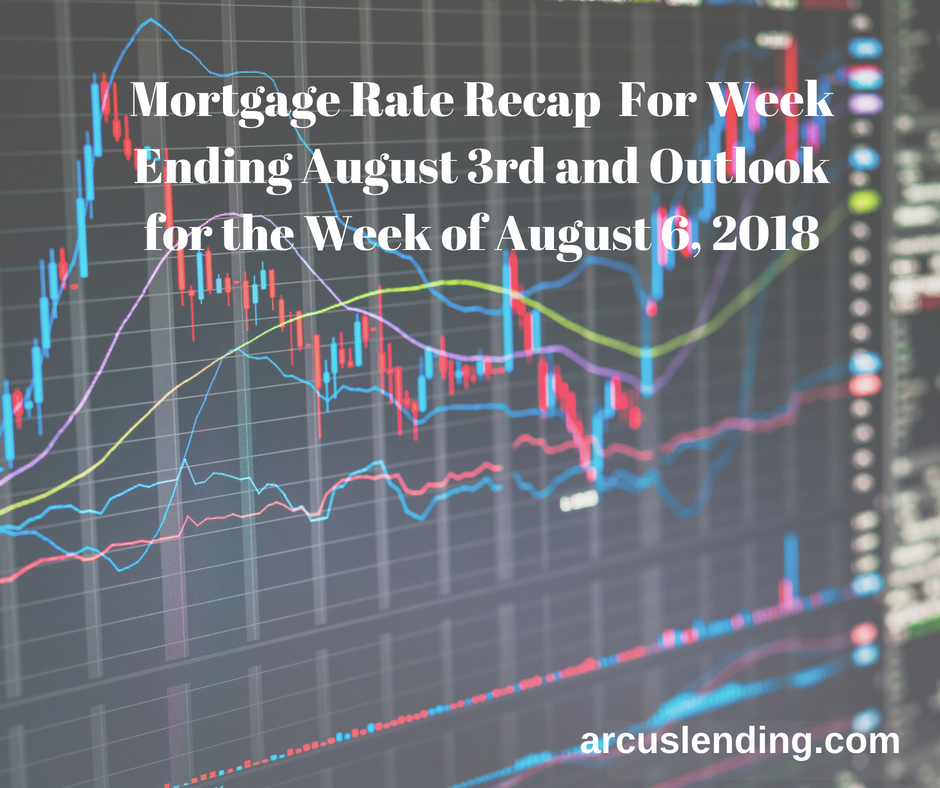 Despite continued tariff threats and retaliations between the US and China, the markets are reacting more to the continuing strength in the economy, led by a strong job market.  Overall, the impact on mortgage rates has been a very slight increase that looks more like a sideways movement.

Globally, aside from the tariff issues, the Bank of England increased their interest rate this week for only the second time since the financial crisis, noting that the slowing of the economy in the first quarter of the year was temporary. There are no plans for another rate increase before the completion of Brexit next March.

Domestically, the FOMC did not increase rates at the last meeting, which was not a surprise to the markets. The minutes released from the meeting did have a slightly more hawkish tone regarding the strength of our economy across the board.

Get a Personalized Mortgage Rate Quote

This candlestick chart below covers the past weeks’ Mortgage Backed Securities (MBS) activity and the impact on interest rates. Rates moved up slightly for all loan products in the last week. MBS directly impact mortgage rates, and the days with red indicate higher rates and those with green – lower rates. 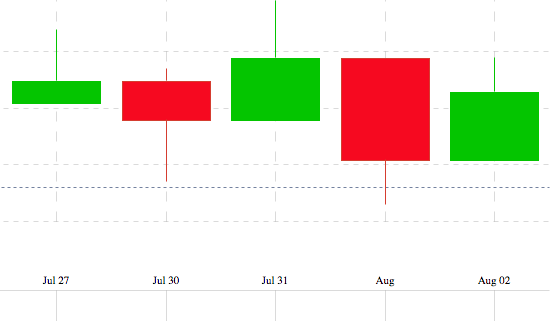 This week’s Mortgage Banking Associations (MBA) weekly rate survey shows effective rates increased slightly for all loan products. The information below applies to all loans with an 80% loan-to-value.

Per the MBA weekly survey: “The average contract interest rate for 30-year fixed-rate mortgages with conforming loan balances ($453,100 or less) increased to 4.84 percent from 4.77 percent, with points remaining unchanged at 0.45 (including the origination fee.)”

“The average contract interest rate for 30-year fixed-rate mortgages with jumbo loan balances (greater than $453,100) increased to 4.76 percent from 4.72 percent, with points increasing to 0.37 from 0.31 (including the origination fee.)”

“The average contract interest rate for 15-year fixed-rate mortgages increased to 4.29 percent from 4.23 percent, with points increasing to 0.53 from 0.44 (including the origination fee.)”

“The average contract interest rate for 5/1 ARMs increased to its highest level in the history of the survey, 4.17 percent from 4.09 percent, with points increasing to 0.32 from 0.29 (including the origination fee.)”

Bankrate’s weekly survey of mortgage and economic experts, countrywide, shows the majority (43%) predicting interest rates will increase this coming week (plus or minus two basis points), and the remaining experts are split at 29% predicting rates will be unchanged, and 29% expect interest rates to fall next week.

My prediction is that rates will remain unchanged in the coming week, as quoted in the Bankrate report, “This is the sixth week in a row that I am predicting that mortgage rates will remain the same. The elephant in the room was the minutes of the Federal Reserve meeting. Pretty much everything in that announcement was what the market expected. Other than that, there is a constant chatter of trade war but that has had little impact on stocks or bonds. With not much else to impact mortgage rates in a significant way, expect another week of stable rates (which, by the way, no one should be complaining about after the steep hike earlier this year).”

The chart below, from Freddie Mac’s weekly mortgage survey, shows conforming rates increased over the last week, July 27th to August 2nd, for 30Y fixed, 15Y fixed and the 5/1 ARM.

The higher rate environment, coupled with the ongoing lack of affordable inventory, has led to a drag on existing-home sales in the last few months. Yesterday, the Federal Reserve passed on raising short-term rates, but with the embers of a strong economy potentially stoking higher inflation, borrowing costs will likely modestly rise in coming months.

Even with home price growth easing slightly in some markets, mortgage rates hovering near a seven-year high will certainly create affordability challenges for some prospective buyers looking to close.”

There has been nothing to gain from floating over the first seven months of 2018, and that will continue to be the case for the foreseeable future.  Due to interest rates staying flat or increasing slightly, we recommend locking in as soon as possible, regardless of whether you expect to close within 15 or 60 days.