If you read the economic “tea leaves,” interest rates should be much higher right now than they are given the combination of a booming US economy, the Feds back to raising rates, and inflation solidly above 2.0%. What’s holding them steady? Uncertainty in the markets keeps money invested in the bond market – seen as a safe haven for investors when there is actual or potential turmoil expected to rock the markets. Right now there’s plenty of that going around.

The main issues spooking investors are the continuing effects of tariffs and threatened trade wars, as well as the potential political upheaval in the US with the convictions of Paul Manafort and guilty plea of Michael Cohen. Plenty of issues globally adding to the markets apprehensions, beyond the trade war concerns – including the split between the US and the EU over Iran.

The minutes from the latest Fed meeting promised a rate hike on the next meeting, however no guarantee that there will be the fourth hike this year. While this news usually won’t impact mortgage-backed securities, it gives an overview of how political events are taking precedence over normal market actions/reactions.

This candlestick chart below covers the past weeks’ Mortgage Backed Securities (MBS) activity and the impact on interest rates. MBS started the week at 101.81 and closed out the week at 101.92, a very slight increase. MBS directly impact mortgage rates, and the days with red indicate higher rates and those with green – lower rates. 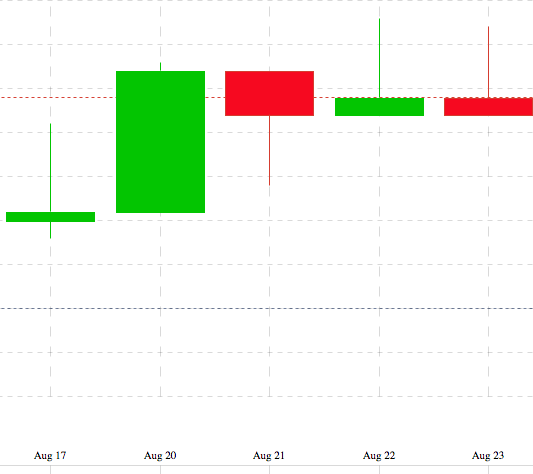 This week’s Mortgage Banking Associations’ (MBA) weekly rate survey shows effective rates decreased slightly for all loan products, with the exception of the 30-year fixed products. Conforming 30-year fixed and the Jumbo 30-year fixed decreased in rate and in points, so the effective rate decreased from the previous week. The information below applies to all loans with an 80% loan-to-value.

Per the MBA weekly survey: “The average contract interest rate for 30-year fixed-rate mortgages with conforming loan balances ($453,100 or less) remained unchanged from 4.81 percent, with points decreasing to 0.42 from 0.43 (including the origination fee.)”

“The average contract interest rate for 30-year fixed-rate mortgages with jumbo loan balances (greater than $453,100) decreased to 4.68 percent from 4.73 percent, with points decreasing to 0.28 from 0.29 (including the origination fee.)”

“The average contract interest rate for 15-year fixed-rate mortgages decreased to 4.25 percent from 4.27 percent, with points decreasing to 0.47 from 0.52 (including the origination fee.)”

“The average contract interest rate for 5/1 ARMs decreased to 4.00 percent from 4.06 percent, with points increasing to 0.52 from 0.48 (including the origination fee.)”

Get a Mortgage Rate Quote for Home Purchase or Refinance

Bankrate’s weekly survey of mortgage and economic experts, countrywide, shows the majority (60%) predicting interest rates will remain unchanged this coming week (plus or minus two basis points), while the remaining are split between 20% predicting rates will increase and 20% expect interest rates to fall next week.

My prediction is that rates will remain unchanged this week, as quoted in the Bankrate report, “Mortgage rates will remain the same. Weekly fluctuations notwithstanding, mortgage rates this week are exactly at the same point where they were in mid-April. After a sudden hike at the beginning of the year, we are now in the fourth month of stable rates. That shouldn’t change this week. If anything, President Trump’s potential problems with Manafort and Cohen can be a reason to park money in safe instruments like bonds, which usually help lower the mortgage rates.” 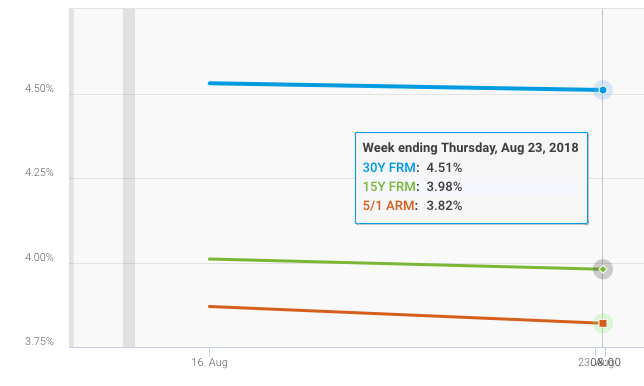 Backed by very strong consumer spending, the economy is red-hot this month, which in turn is rippling through the financial markets and driving equities higher.

Unfortunately, the same cannot be said about the housing market, where it appears sales activity crested in late 2017. Existing-home sales have now stepped back annually for the fifth straight month, and purchase mortgage applications this week were barely above year-ago levels.

It is clear affordability constraints have cooled the housing market, especially in expensive coastal markets. Many metro areas desperately need more new and existing affordable inventory to break out of this slump.”

After four months of languishing interest rates, there continues to be no reason to float if you’re planning on closing a loan in the next 45 days. Long-term views also provide little hope for a significant drop in rates for the foreseeable future. Get a rate quote today!