While the stock market had a sell-off after the Federal Open Market Committee (FOMC) meeting yesterday, the mortgage bond market did not react to the Fed’s leaving the overnight rate alone. Bond traders have already factored in the Fed’s position on inflation and their predicted rate increases for the year and this month’s FOMC meeting did not challenge that at all. While some key economic data hit the Fed’s 2% target inflation rate, these are one-time markers, and the Fed is looking for a trend that encompasses a broader span of time to signal true inflation at or above their target.

The most significant pending news that may move the mortgage bond market, impacting mortgage rates, is tomorrow’s (May 4th) April employment announcement. All the data points so far indicate more wage pressure – a strong indication of inflation, which mortgage bonds hate. If the April numbers announced tomorrow are better than predicted, expect to see a negative impact on mortgage interest rates.

Mortgage Rates Flat this Past Week

This week’s candlestick chart, below, shows Mortgage Backed Securities (MBS) trading fairly flat over the past week, with positive and negative swings having little to no impact on effective interest rates.  MBS directly impact mortgage rates, and the days with red indicate higher and green lower rates. 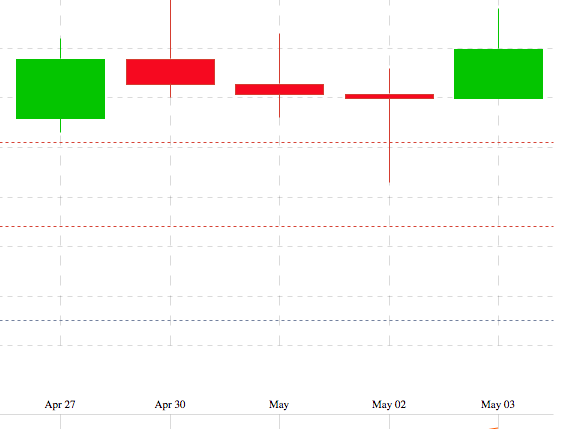 “The average contract interest rate for 30-year fixed-rate mortgages with conforming loan balances ($453,100 or less) increased to its highest level since September 2013, 4.80 percent, from 4.73 percent, with points increasing to 0.53 from 0.49 (including the origination fee.)”

“The average contract interest rate for 30-year fixed-rate mortgages with jumbo loan balances (greater than $453,100) increased to its highest level since September 2013, 4.69 percent, from 4.64 percent, with points increasing to 0.42 from 0.39 (including the origination fee.)”

The average contract interest rate for 15-year fixed-rate mortgages increased to its highest level since February 2011, 4.21 percent, from 4.13 percent, with points decreasing to 0.49 from 0.52 (including the origination fee.)”

The average contract interest rate for 5/1 ARMs increased to a survey high of 4.03 percent, from 3.98 percent, with points remaining unchanged at 0.44 (including the origination fee.)”

Bankrate’s weekly survey of mortgage and economic experts, countrywide, shows a majority (44%) predicting interest rates will remain flat this coming week (plus or minus two basis points), while 33% see rates increasing, and 22% see them falling next week.

The chart from Freddie Mac, below, shows a snapshot of conforming rates so far this week (April 30th – May 3rd), which are clearly trading ‘sideways’. 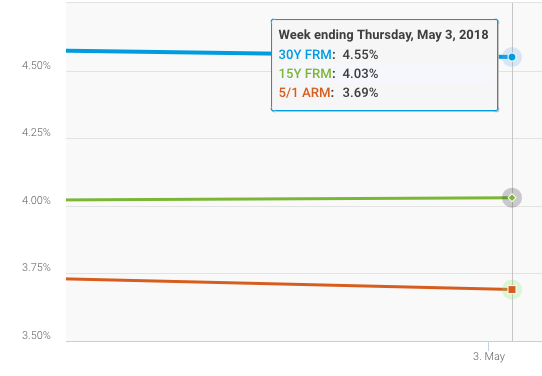 My prediction for rates this week, as quoted in the Bankrate report, “As predicted, we saw some correction last week and the mortgage rates dipped just a tad bit. The dip was so small the borrowers may not have felt it. The same trend is expected to continue this week, with little change in mortgage rates. However, watch out for the employment report. Any big delta between the expected to actual numbers can swing the interest rate either way.”

The recommendation is to locking in a rate now if you’re planning on closing within the next 30-45 days. Pending jobs data poses a significant risk of increasing rates in the immediate short term, and the overall heating up of the economy leaves little room for rates to fall significantly within that time frame. As I advised last week – the time is now to get into the market and lock in an interest rate.

Lock in your Rate before they rise again. Get a Rate Quote.