Mortgage-backed securities have languished in the same trading ‘rut’ for the last ten weeks. What’s important about that is the top of the ‘rut,’ and the bottom of that ‘rut,’ and here’s why. As the markets react to the release of economic indicators, national, and global news, bonds, and mortgage-backed securities have been rising and falling within the same tight range (i.e., the ‘rut’). If they were to break out above the top of the range – mortgage rates would fall, and if they were to fall below the bottom of the range – rates would increase.

Most of the pressure on the markets over the last several weeks has come from fear of a significant conflict with North Korea, as well as over a trade war caused by tariffs against China. Also, the additional inflationary pressure was anticipated from employment and wage increases. These fears are now dissipating, and the ‘flight to safety,’ which occurs when investors park the majority of their funds in the US Bond market, is beginning to fade. That means money is leaving the bond market for other, riskier global markets – and that’s bad for mortgage interest rates.

Current market attention focuses on inflation concerns coming from two areas. One is the increasing price of oil, which has finally climbed from the $40-$50/barrel level up to almost $70/barrel. The other is an effect indirectly from the announced tariffs, as some portions of the manufacturing sector are hoarding certain commodities as a result of the tariffs. Inflation is the number one enemy of bonds and mortgage-backed securities, and while it is still below the Feds targeted 2%, it is creeping closer to that number. All of this has moved mortgage-backed securities (MBS) to the bottom of the ‘rut’ and rates will go up if they break below that level.

Another Week of Stable Mortgage Rates

This week’s candlestick chart, below, shows more sideways movement in Mortgage Backed Securities (MBS) over the past week, with pressure at the bottom increasing mid-week.  MBS directly impact mortgage rates, and the days with red indicate higher and green lower rates. 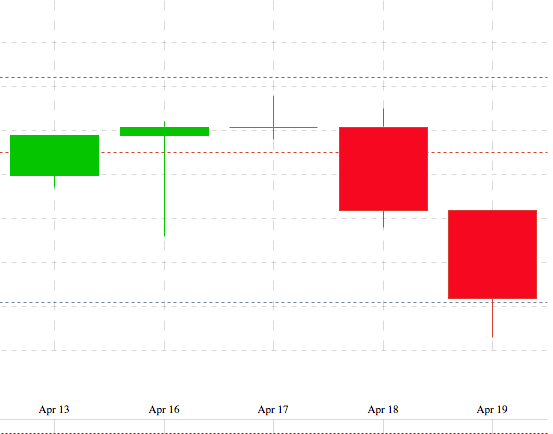 “The average contract interest rate for 30-year fixed-rate mortgages with jumbo loan balances (greater than $453,100) remained unchanged at 4.53 percent, with points increasing to 0.38 from 0.31 (including the origination fee.) ”

“The average contract interest rate for 15-year fixed-rate mortgages remained unchanged at 4.08 percent, with points decreasing to 0.47 from 0.50 (including the origination fee.)”

“These rates are all for 80 percent loan-to-value ratio (LTV) loans.”

Weekly mortgage rates and trends from Bankrate, a compilation of mortgage and economic experts across the country, shows a majority prediction (54%) that rates will increase in this coming week (plus or minus two basis points), just 8% predicted rates would fall and 38% predicted they would remain flat. 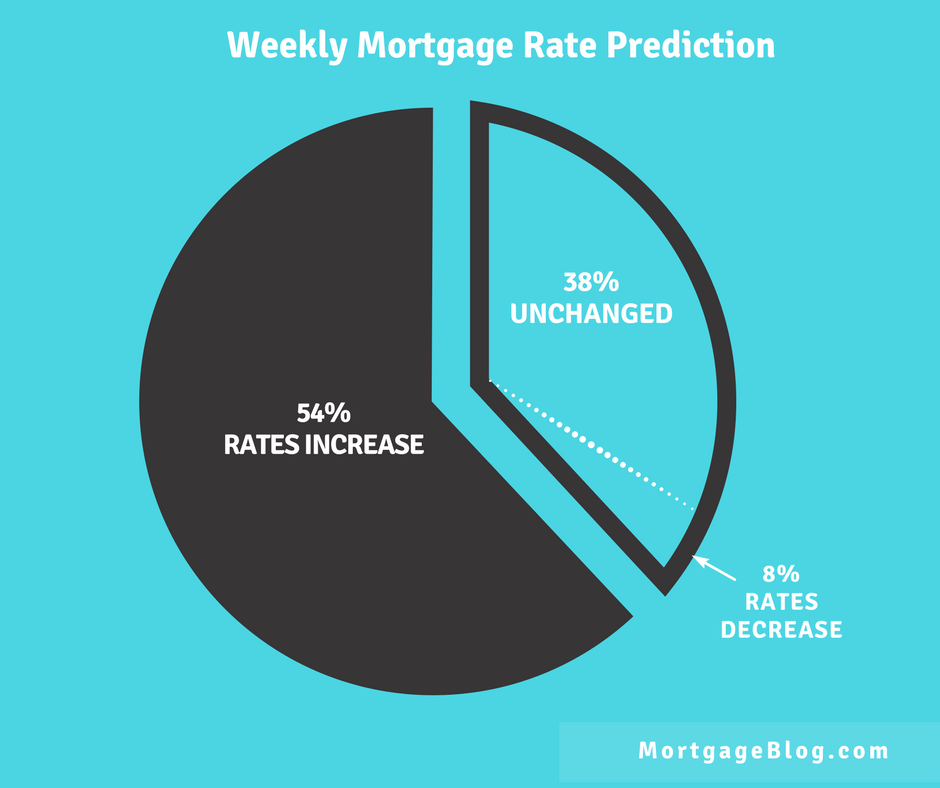 My prediction for rates this week, as quoted in the Bankrate report, “Long end of the Treasury yield curve which has a direct impact on mortgage rates has been trading in a very narrow range since the beginning of February. That explains why the rates have remained mostly stable for almost 10 weeks now. With trade fears and inflation worries on the back burner as of now and a relatively calm geopolitical environment, expect more of the same — i.e., mortgage rates to change very little in the coming week.”

Lock if you are planning on closing within the next 30-45 days. While rates should continue at the current levels, with very slight movement up and down, there is no indication they will improve and a slight risk for an increase in the short term.