The markets will close ahead of the long weekend at 2 pm EST on March 29th, and traders began ‘parking” money in the bond market late Wednesday, the 28th. That means the market will react to the economic data released this week until Monday, April 2nd. We’ll see traders moving money out of bonds and putting it to work, based on the data showing inflation increasing slightly.

Top of the economic indicators released this week was the Feds key measure of inflation – Personal Consumption Expenditures (PCE) with a year-over-year (YOY) reading of 1.8%, and the more stable Core PCE (minus food and energy) with a YOY reading of 1.6%. PCE is goods and services targeted and consumed by individuals.

Add into the overall inflation picture: Personal income, up 0.4%, Personal Spending, up 0.2%, and weekly jobless claims at a low of 215,000. The weekly jobless claim number is the lowest level since 1973. Finally, it’s not surprising that the University of Michigan’s Consumer Sentiment survey came in at 101.4 – the best reading since 2004.

This week’s candlestick chart, below, shows a slight improvement in Mortgage Backed Securities (MBS) over the short week, however that translated to little actual movement in rates. MBS directly impact mortgage rates, and the days with red indicate higher and green lower rates. 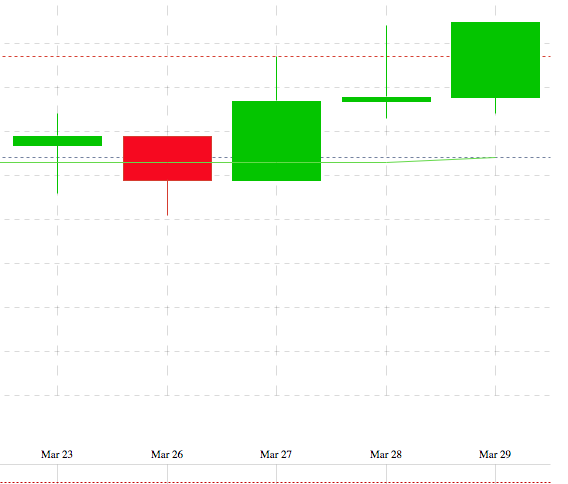 The Mortgage Banking Association’s (MBA) weekly rate survey shows “the average contract interest rate for 30-year fixed-rate mortgages with conforming loan balances ($453,100 or less) increased to 4.69 percent from 4.68 percent, with points decreasing to 0.43 from 0.46 (including the origination fee).”

“The average contract interest rate for 15-year fixed-rate mortgages decreased to 4.09 percent from 4.12 percent, with points decreasing to 0.46 from 0.51.”

“These rates are all for 80 percent loan-to-value ratio (LTV) loans.”

Get a Rate Quote Customized for your Scenario

Weekly mortgage rates and trends from Bankrate, a compilation of mortgage and economic experts across the country, shows 43% predict that rates will remain relatively unchanged this coming week; 43% predict rates will fall, and 14% predict an increase (plus or minus two basis points).

My prediction for rates this week, as quoted in the Bankrate report, “Last week, mortgage rates got a break from a near constant increase this year. Even though the decline in rates was modest, expect some of that to continue this week. Volatility in the stock market is helping improve the pricing of mortgage bonds, which lowers the rate that consumers get. Till the time there is a concern around tariffs and trade wars, stock markets will remain bearish, which should keep the mortgage rates either at the same level or slightly lower.”

With the market closing early on Thursday, March 29th, take advantage of locking a rate early Monday, April 2nd, if you’re closing in 10-15 days. Float cautiously if you’re closing in 30-45 days, watching for any action around trade wars which could produce a volatile market and rising interest rates.