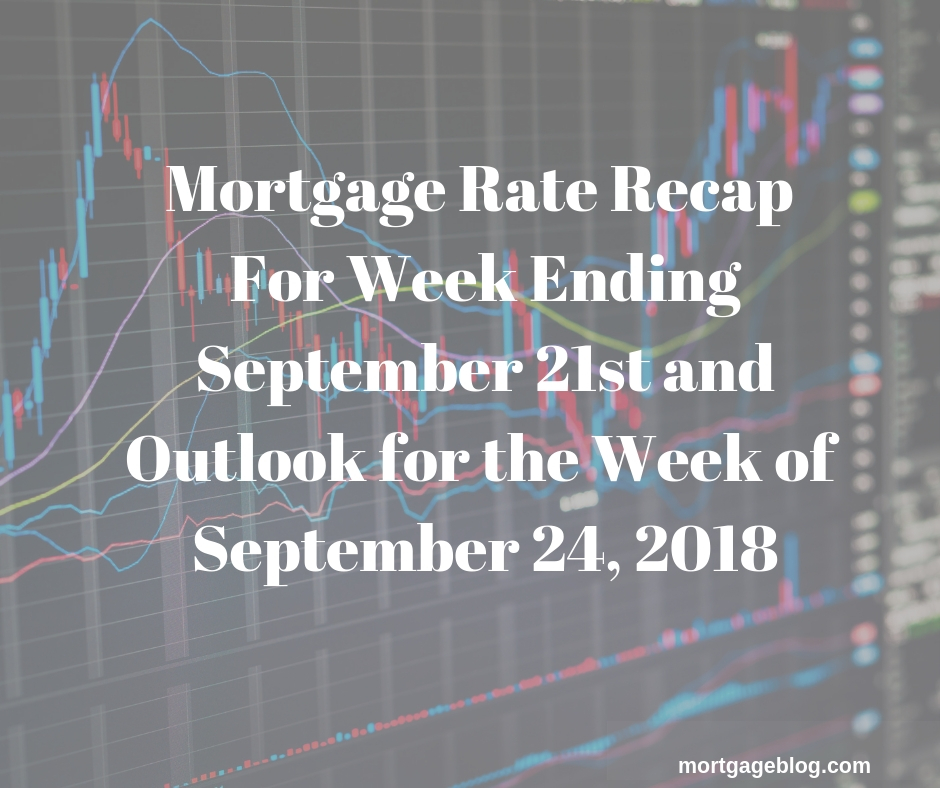 Mortgage rates have increased for the last three weeks, and there’s a strong likelihood that they will continue on that path for the foreseeable future, and definitely for the next week. Earlier in the week, there was a sell-off in the market which was justifiable – so no correction is expected. The Fannie Mae 4% coupon is now at it’s highest price in several years.

Other significant economic data released was Jobless Claims 4-week moving average coming in at a new 50-year low; national median home price, now $264,800, makes 78 straight months of increase; and there was a very slight increase in housing inventory from a 4.1 to 4.3 months supply. Trade war concerns are not impacting bond traders now.

Also notable – the dollar is slipping against other leading currencies, making it less enticing for investing in US Treasuries. The dollar weakened further this morning after reports that the US and Canada are unlikely to reach a deal on NAFTA. Further increases in mortgage prices will be fueled by the Fed rate hike set for next week, along with continuing growth in the economy that’s moving inflation up.

This candlestick chart below covers the past weeks’ Mortgage Backed Securities (MBS) activity and the impact on interest rates. MBS started the week at 101.09 and were trading at 10.75  at mid-day September 20th. MBS directly impact mortgage rates, and the days with red indicate higher rates and those with green – lower rates. 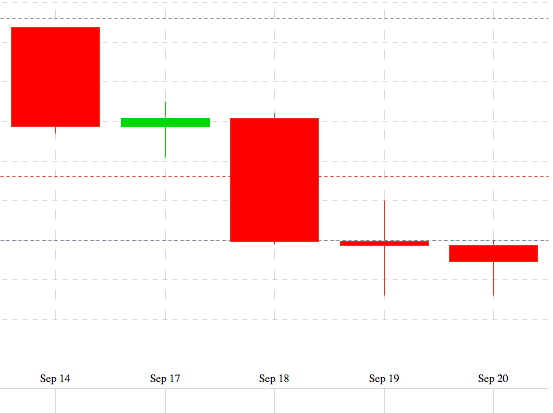 This week’s Mortgage Banking Associations’ (MBA) weekly rate survey shows effective rates decreased slightly for all loan products, with the exception of the 30-year fixed Jumbo which remained unchanged. The information below applies to all loans with an 80% loan-to-value.

Per the MBA weekly survey: “The average contract interest rate for 30-year fixed-rate mortgages with conforming loan balances ($453,100 or less) increased to its highest level since April 2011, 4.88 percent, from 4.84 percent, with points decreasing to 0.44 from 0.46 (including the origination fee.)”

“The average contract interest rate for 30-year fixed-rate mortgages with jumbo loan balances (greater than $453,100) increased to 4.77 percent from 4.72 percent, with points decreasing to 0.28 from 0.47 (including the origination fee.)”

“The average contract interest rate for 15-year fixed-rate mortgages increased to 4.30 percent from 4.28 percent, with points increasing to 0.49 from 0.47 (including the origination fee.)”

“The average contract interest rate for 5/1 ARMs increased to 4.17 percent from 4.07 percent, with points decreasing to 0.29 from 0.30 (including the origination fee.)”

Bankrate’s weekly survey of mortgage and economic experts, countrywide, shows the majority (75%) predicting interest rates will increase this coming week (plus or minus two basis points), while 17% predicting rates will decrease. The remaining 8% expect interest rates to fall again next week.

My prediction is that rates will move higher this week, as quoted in the Bankrate report, “Mortgage rates will move up. After three back-to-back weeks of the rate increase, the mortgage rates are now at the highest level of the year. That trend would most likely continue. The trade war is taking a toll on the bond prices. Tariffs mean higher prices to the consumer which means increased inflation. Bonds hate inflation and the result is higher mortgage rates to the borrowers. Expect more of the same in the coming week.”

The chart below, from Freddie Mac’s weekly mortgage survey, shows conforming rates increased for the week of September 14th to September 21st, for 30Y fixed, 15Y fixed and the 5/1 ARM. 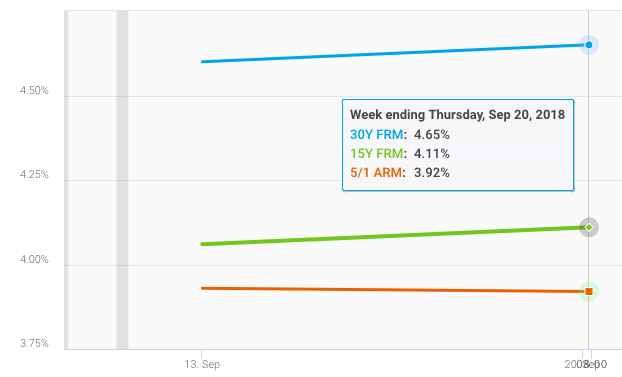 Freddie Mac’s weekly mortgage survey noted, “The 30-year fixed-rate mortgage increased once again to its highest level since May.

Amidst this four-week climb in mortgage rates, the welcoming news is that purchase applications have risen on an annual basis for five consecutive weeks. However, given the widespread damage caused by Hurricane Florence in the Carolinas, the next few months of housing activity will likely be somewhat volatile.”

Strongly advise locking in an interest rate as soon as possible, regardless of when you plan on closing. The market is on the move up and there is no benefit to floating at this time or in the foreseeable future.