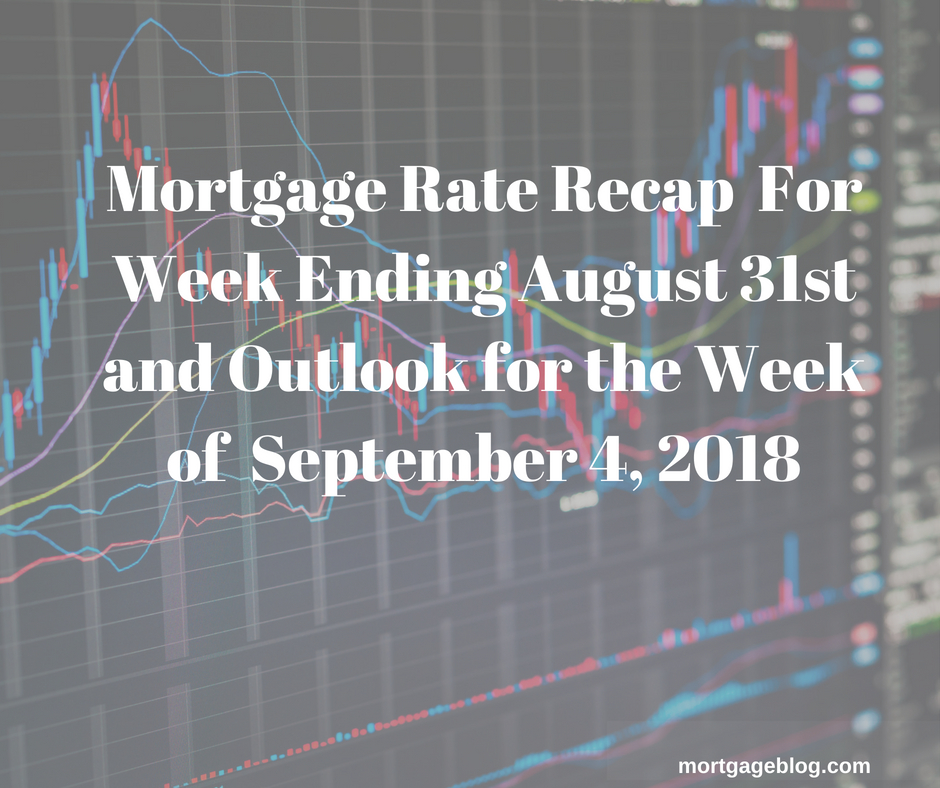 The Federal Reserve uses PCE Index, Personal Consumption Expenditures, as their preferred measure of inflation, and it’s now hit a 6-year high at 2.3%. The impact of an uber strong GDP (4.2%), combined with the 2.3% PCE Index, should be causing a sell-off in Mortgage Backed Securities (MBS) – but that’s not happening right now. The markets have stagnated waiting for Trade agreements to be hammered out and signed.

At this point, Canada is at the table with the U.S. and the possibility exists they will sign by Friday, August 31st.  Mexico already signed the new NAFTA deal with the U.S., and Europe is talking about settling their trade issues with the U.S., including lifting tariffs on industrially produced goods like automobiles.

This does not include China, but even without that, if Canada signs an agreement by Friday, the markets will react by moving out of the safety of U.S. bonds and into more speculative (risky) investments. That will impact MBS which will, in turn, cause mortgage rates to increase and it could happen quickly.

The trade war with China has gotten much rockier and tenuous with the issues with North Korea broiling up again. No progress on trade talks there at all.

This candlestick chart below covers the past weeks’ Mortgage Backed Securities (MBS) activity and the impact on interest rates. MBS started the week at 101.94 and closed out the week at 101.74, a slight decrease. MBS directly impact mortgage rates, and the days with red indicate higher rates and those with green – lower rates. 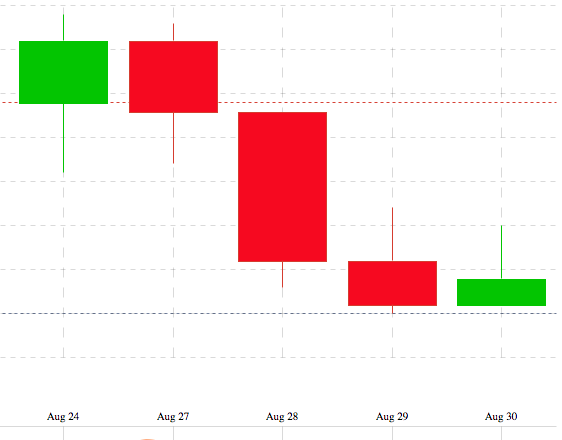 This week’s Mortgage Banking Associations’ (MBA) weekly rate survey shows effective rates decreased slightly for all loan products, with the exception of the 30-year fixed Jumbo which remained unchanged. The information below applies to all loans with an 80% loan-to-value.

Per the MBA weekly survey: “The average contract interest rate for 30-year fixed-rate mortgages with conforming loan balances ($453,100 or less) decreased to 4.78 percent from 4.81 percent, its lowest rate since the week ending July 20, 2018, with points increasing to 0.46 from 0.42 (including the origination fee.)”

“The average contract interest rate for 30-year fixed-rate mortgages with jumbo loan balances (greater than $453,100) remained unchanged at 4.68 percent from the week prior, with points increasing to 0.30 from 0.28 (including the origination fee.)”

“The average contract interest rate for 15-year fixed-rate mortgages decreased to 4.24 percent from 4.25 percent, with points increasing to 0.48 from 0.47 (including the origination fee.)”

“The average contract interest rate for 5/1 ARMs decreased to 3.95 percent from 4.00 percent, with points decreasing to 0.34 from 0.52 (including the origination fee.)”

Bankrate’s weekly survey of mortgage and economic experts, countrywide, shows a small majority (47%) predicting interest rates will remain unchanged this coming week (plus or minus two basis points), while 40% predicting rates will increase. The remaining 13% expect interest rates to fall again next week.

My prediction is that rates will move higher this week, as quoted in the Bankrate report, “Mortgage rates will move higher. There seems to be a sudden bearish tone towards bonds. The reasons are not that obvious though, but the potential deal on NAFTA could be the trigger. With less uncertainty, money flows from safe instruments like bonds to riskier one like stocks. However, a stronger dollar will continue to support bond prices. With the pressure on bond prices, the mortgage rates could trend higher, but the change may not be significant.”

The chart below, from Freddie Mac’s weekly mortgage survey, shows conforming rates increased slightly over the last week, August 24th to August 30th, for 30Y fixed, 15Y fixed and the 5/1 ARM. This is in contrast to the slight decrease reported by the MBA and shown above. 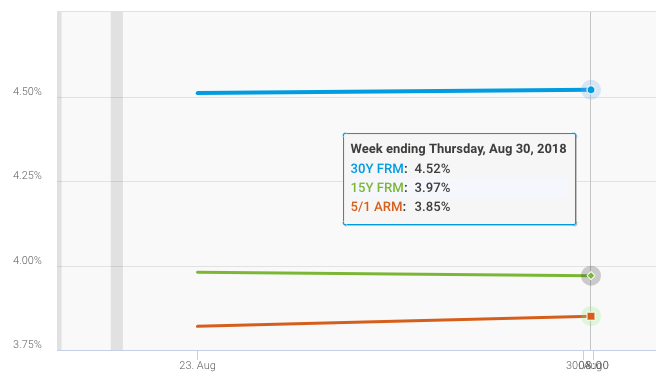 While sales and price growth have softened these last few months, this leveling of rates may be helping more buyers reach the market. Purchase mortgage applications this week were once again modestly above year-ago levels.

Heading into the fall, the recent slowdown in price appreciation in several markets is good news for the many prospective buyers who were priced out earlier this year. However, despite the economy in the second quarter expanding at its fastest rate in nearly four years, Freddie Mac is still expecting only a slight increase (0.2 percent) in total home sales in 2018 (6.14 million) compared to last year (6.12 million).

Given the strength of the economy, it is possible for home sales to pick up even more before year’s end. The key factor will be if affordably-priced inventory increases enough to continue this recent trend of cooling price appreciation.”

If you’re in the market for a mortgage right now, whether you’re closing in 10 days or 45+ days, lock in an interest rate immediately.  The doldrums in rates that we’ve experienced over the summer could evaporate if trade issues begin to settle across the globe. Expect rates to rise if this happens – even by the end of this week.