The first Friday of every month is almost always one of shock and awe; the release of the monthly employment data is rarely a calm event. The March data released last Friday did disappoint in terms of surprise. The news improved Mortgage Backed Securities (MBS) price by 40 basis points (bps) on Friday and 122 bps for the week.

MBS usually goes up in price on a weak economy news. The increase in MBS has an inverse effect on mortgage rates i.e. when MBS prices go up, mortgage rates go down.

Get a Live Rate Quote Here

The unemployment rate hit at 7.6% down from 7.7% in Feb, so far on the surface that looks good, but not really. Non-farm job growth increased just 88K; non-farm private job growth was up just 95K. No matter the spin, the report was the weakest since last June. As for the decline in the unemployment rate to 7.6%; adds to the concerns, it indicates an increasing number of discouraged workers no longer looking for jobs.

Get a Mortgage Rate Quote in Seconds

Two things are contributing to what now appears to be a declining economic outlook.

After interest rates rising for most of 2013 (check out the chart below), suddenly it has taken a U turn. We now have an ugly employment report and nagging fear that economy is not recovering as fast as it should. And there is always the Europe debt crisis that keeps coming back. 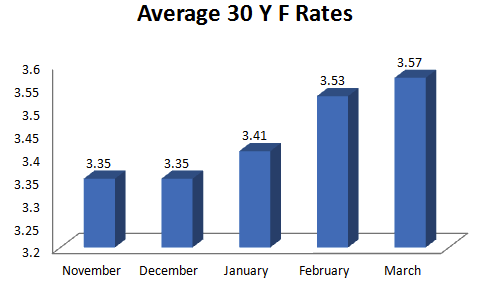 In light of all this, I won’t be surprised if the rates remain mostly unchanged for some time (read few months). The market may remain volatile and on some days the rates will go up or down. But over next few weeks the rates may not change much. Its important to work with loan officer who tracks live MBS and is able to advise you when is a good time to lock.