California Mortgage Rates for Refinance and Home Purchase Loans have been all over the place this year. According to Freddie Mac Primary Mortgage Market Survey 30 Year Fixed Rate started at 4.77%, went over 5% in week 2 of February and since started the climb down to be now at exactly the same level where they started at the beginning of the year (see chart below). Most of the climb down in recent weeks have been caused by impact on stock markets due to uncertainties in Japan and Libya (and most part of Mid-East). 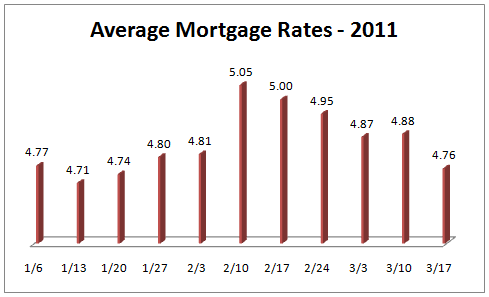 Mortgage Rates Outlook for the week and beyond –

Existing and new home sales are the main focus but unlikely to show any change in the trend of weak sales that has been the situation for two years. Japan’s problems with their nuclear reactors remain but the latest reports imply some progress on a couple of reactors while a another reactor is weakening. In Libya the UN forces clobbered Libyan positions with heavy use of missiles but Qaddafi remains defiant. Treasuries and mortgage rates are likely to stay within a tight range as long as there is no change in the situations in Japan and in the Mideast.

The stock market, after the strong selling on panic moves is likely to rebound and recover most of the losses on the indexes. Gold and crude oil likely to increase in price after a volatile last week. Through the week as long as investors return to equity markets the bond and mortgage markets will see prices fall and yields increase. The week is very likely to be volatile from day to day with unfolding news out of Japan and the Mideast. We do not expect interest rates to increase a lot, but we also don’t see any major decline this week. Still suggest using the recent rate decline to get deals done and not get enthused about lower rates. Interest rates are not likely to fall much while the wider perspective is still bearish as the US economy improves.

So whether you are looking to Refinance or Purchase a home, it may be a good time to lock your rates. If you need a rate quote, make sure you complete the Live Rate Quote form on the Sidebar or contact us.