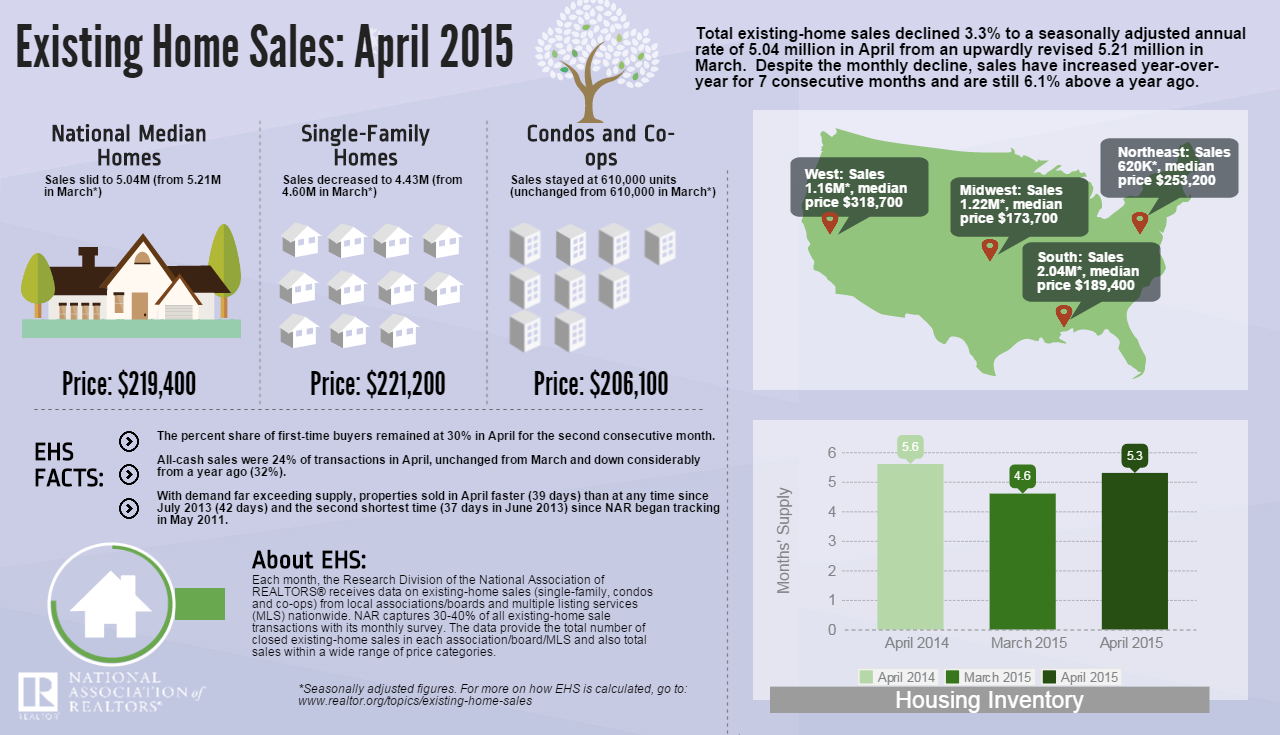 Total existing-home sales, which are completed transactions that include single–family homes, townhomes, condominiums and co–ops, declined 3.3 percent to a seasonally adjusted annual rate of 5.04 million in April from an upwardly revised 5.21 million in March.

Despite the monthly decline, sales have increased year–over–year for seven consecutive months and are still 6.1 percent above a year ago.

The problem does not appear to be a sign of housing market weakness however.

“April’s setback is the result of lagging supply relative to demand and the upward pressure it’s putting on prices,” he said.

“However, the overall data and feedback we’re hearing from Realtors® continues to point to elevated levels of buying interest compared to a year ago. With low interest rates and job growth, more buyers will be encouraged to enter the market unless prices accelerate even higher in relation to incomes.”

Total housing inventory at the end of April increased 10.0 percent to 2.21 million existing homes available for sale, but is still 0.9 percent below a year ago (2.23 million). Unsold inventory is at a 5.3–month supply at the current sales pace, up from 4.6 months in March.

The median existing–home price for all housing types in April was $219,400, which is 8.9 percent above April 2014. This marks the 38th consecutive month of year–over–year price gains and is the largest since January 2014 (10.1 percent).

“Housing inventory declined from last year and supply in many markets is very tight, which in turn is leading to bidding wars, faster price growth and properties selling at a quicker pace,” says Yun.

“To put it in perspective, roughly 40 percent of properties sold last month went at or above asking price, the highest since NAR began tracking this monthly data in December 2012.”

We could be in for a bit of relief with housing inventory issues. Numbers on “housing starts” have shown very strong for the past few months.

Construction started on new U.S. homes sprang up 20.2% in April to a seasonally adjusted annual rate of 1.14 million. That’s the biggest monthly percentage gain in more than 24 years and the highest level since November 2007, the U.S. Commerce Department reported.

“The April data also strengthen the view that the weakness in February and March was largely transitory and likely caused by harsh weather conditions,” Robert Wetenhall, an analyst with RBC Capital Markets, wrote in a research note.”

Speaking of low interest rates According to Freddie Mac, the average rate for a 30–year, conventional, fixed–rate mortgage remained below 4.00 percent for the fifth straight month, falling in April to 3.67 percent from 3.77 percent in March.

Despite the existing home sales data hiccup, everything continues to point to a very strong summer for home sales. If, of course, builders can keep the market satisfied with fresh inventory.