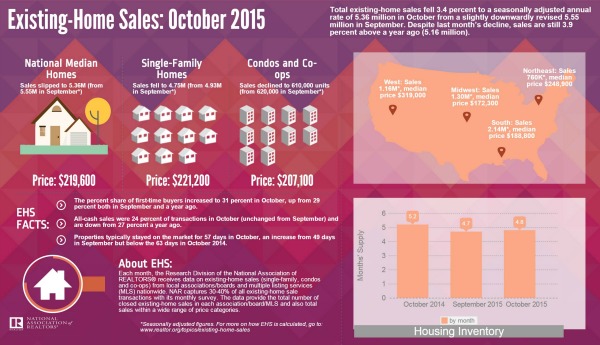 With mortgage rates remaining below 4 percent for the third straight month, existing-home sales in October were at a healthy pace but failed to keep up with September’s jump, according to the National Association of Realtors®. All four major regions saw no gains in sales in October.

Total existing-home sales, which are completed transactions that include single-family homes, townhomes, condominiums and co-ops, fell 3.4 percent to a seasonally adjusted annual rate of 5.36 million in October from 5.55 million in September. Despite last month’s decline, sales are still 3.9 percent above a year ago (5.16 million).

Lawrence Yun, NAR chief economist, says a sales cooldown in October was likely given the pullback in contract signings the last couple of months.

“New and existing-home supply has struggled to improve so far this fall, leading to few choices for buyers and no easement of the ongoing affordability concerns still prevalent in some markets,” he said.

In other words, most markets need more inventory as soon as possible. More on that continuing issue below.

44 consecutive months of price gains, we’ll take that all day.

Total housing inventory at the end of October decreased 2.3 percent to 2.14 million existing homes available for sale, and is now 4.5 percent lower than a year ago (2.24 million). Unsold inventory is at a 4.8-month supply at the current sales pace, up from 4.7 months in September.

Get PreApproved for buying a home

It’s crystal clear, and has been for some time, that the market simply does not have enough inventory.

Builders have been focusing on more profitable multi-family and apartment construction as they struggle to keep pace with the growing demand for all types of housing units.

The good news is that they are building. However, it may be next buying season before the focus shifts more to single family units.

Annually, the pace of multifamily spending rose 28% from the October 2014 estimate, and spending on single-family construction was 11% higher.

The NAHB-constructed spending index, which is shown in the graph below (the base is January 2000), indicates that recent gains have been driven by the steady increase in multifamily construction spending.

The pace of the multifamily spending is gradually slowing. The monthly growth rate of multifamily construction fell to 1.4% in October from relatively higher rates in August (8%) and September (6%). NAHB anticipates accelerating growth for single-family spending in 2015.

The existing-home sales numbers were flat nationwide. Hopefully, the weather in some markets will cooperate and allow builders to catch-up to demand.

Falling sales, but higher prices tell the story month after month. There are simply not enough available units to meet the market demand. That drives prices up and continues to stress housing affordability in many markets.

The good news is that mortgage rates remain low and that allows potential buyers to stretch their dollar a little further.

Download our FREE eBook – How To Buy Your First Home