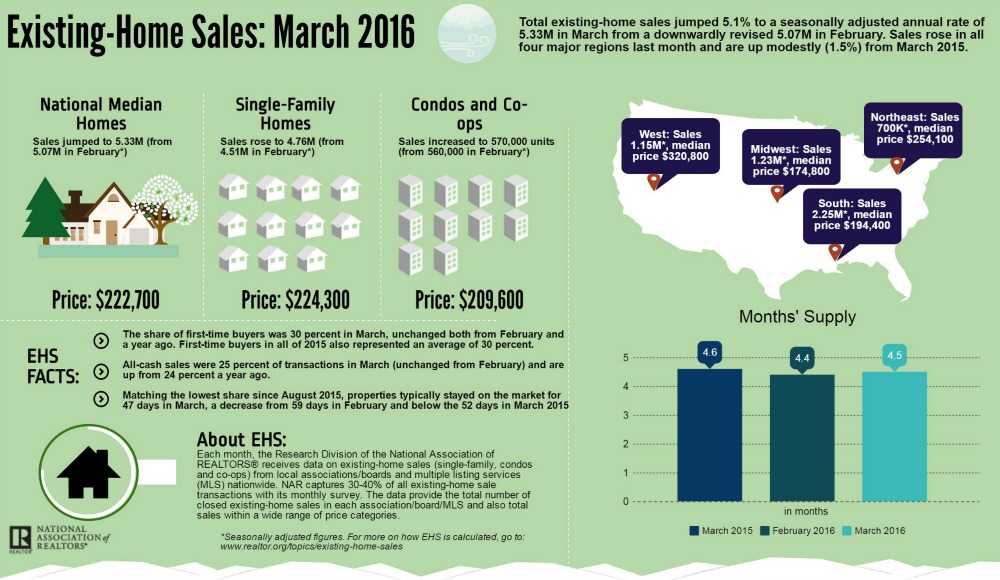 The National Association of Realtors (NAR) released their monthly numbers on total existing-home sales for March recently. The result? Once again – for the 49th consecutive month – the data was strong and shows year-to-year gains from 2015.

Existing home sales are defined as closed transactions that include single-family homes, townhomes and condos. They generally account for 90 percent of the overall housing market.

The March numbers continue to show the strength of the housing market in nearly every market nationwide.

Nationally, the numbers hopped up 5.1 percent to a seasonally adjusted annual rate of 5.33 million in March from a downwardly revised 5.07 million in February.

Get Pre-Approved for Buying a Home

“Closings came back in force last month as a greater number of buyers – mostly in the Northeast and Midwest – overcame depressed inventory levels and steady price growth to close on a home,”

He continued with – “Buyer demand remains sturdy in most areas this spring and the mid-priced market is doing quite well. However, sales are softer both at the very low and very high ends of the market because of supply limitations and affordability pressures.”

I may sound like a broken record, but inventory remains an issue for the housing market. Inventory, or lack thereof, issues exacerbate the other problem the market has to address – housing affordability.

If you are planning to sell then it’s time you stopped hemming and hawing already. Put that house on the market. Unless of course, you are not interest in bidding wars and selling quickly.

In fact, average days on market fell to a paltry 47 days. With summer buying season quickly approaching, that will continue to drop in all likelihood.

The share of first-time buyers was 30 percent in March, unchanged both from February and

a year ago. First-time buyers in all of 2015 also represented an average of 30 percent. Lawrence Yun added:

“With rents steadily rising and average fixed rates well below 4 percent, qualified first-time buyers should be more active participants than what they are right now”

Larry still doesn’t get it apparently. The demographics don’t support a higher share of first-time homebuyers because Millennials are getting married and purchasing homes later in life than previous generations.

There are approximately 31.6 million Millennials between the ages of 25 and 30 that represent a third of the demographic.  As a whole, over 90% of them want to buy a house.

Assuming the economy holds up, a lot of potential buyers will be entering the market over the next 5 years. That’s good news for sellers, builders and the industry as a whole – not so much for buyers who procrastinate though.

Get Pre-Approved For Buying a Home

When broken-down by region, the leaders of the pack on appreciation were the Northeast and the Midwest.

In the Midwest, existing-home sales were up 9.8 percent to an annual rate of 1.23 million in

Existing-home sales in the West crept upward 1.8 percent to an annual rate of 1.15 million in March, but are 2.5 percent lower than a year ago. The median price in the West was $320,800, which is 5.9 percent above last March.

Overall, the housing data continues to paint the same picture it has for the past couple years. The market is strong, especially for sellers, because inventory remains below normal.

Get Pre-Approved For Buying a Home