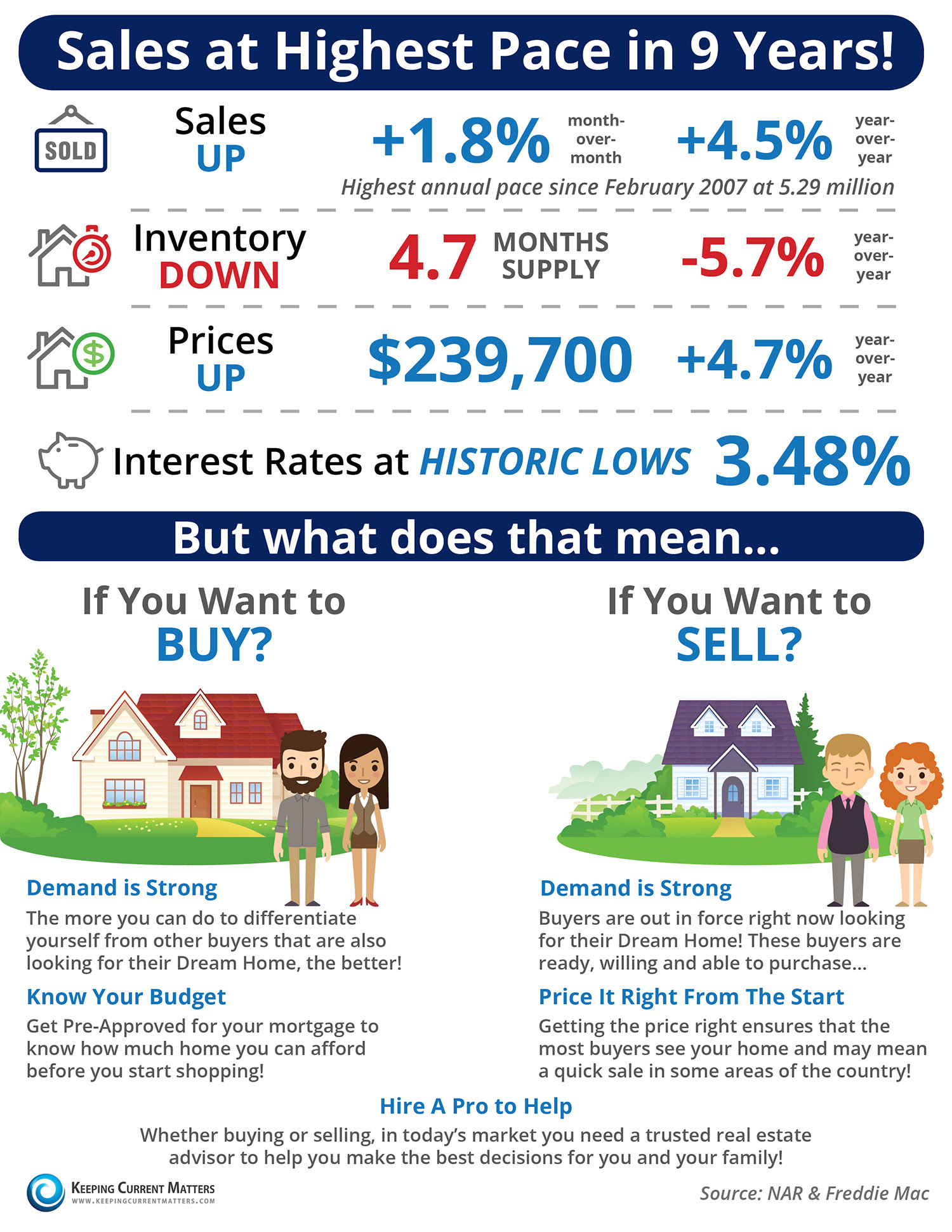 Existing home sales rose 1.8 percent in May – their highest pace since February 2007 – according to the National Association of Realtors (NAR) anticipated monthly report that came out this week. In total, 5.53 million single family, condo and townhome sales came to fruition.

Strong numbers considering that inventory issues – especially on the low-end – continue to disrupt many housing markets. The lack of available homes means that many would-be buyers are struggling to get into the market. It also means home prices keep rising.

The median price of an existing home reached an all-time high in May. NAR said home prices during the monthsurpassed the peak of $236,300 set in June 2015.

May’s price increase marks the 51st consecutive month of year-over-year gains and shows the continued strength of the American housing market. We’re not without issues though, more on that later.

Lawrence Yun, NAR’s chief economist and mouthpiece, weighed in on the existing sales numbers by saying:

“This spring’s sustained period of ultra-low mortgage rates has certainly been a worthy incentive to buy a home, but the primary driver in the increase in sales is more homeowners realizing the equity they’ve accumulated in recent years and finally deciding to trade-up or downsize,” he said.

“With first-time buyers still struggling to enter the market, repeat buyers using the proceeds from the sale of their previous home as their down payment are making up the bulk of home purchases right now.”

What Mr. Yun fails to mention is the lack of inventory is most noticeable in the low-end of the market – the homes that first-time buyers purchase.

Those homes are not getting built – or renovated – at the clip of higher end projects. The latter being more profitable to builders and real estate investors.

Only 2.14 million homes were for sale at the end of April, which at the current sales pace represents 4.6 months of inventory.

Six months is considered a balanced market between buyer and seller.

New construction permits and starts continue to creep up. However, the numbers are still woefully light if we want to cure the inventory issues which are hitting the low-end market especially hard.

Get Pre-Approved for a Mortgage

In the Midwest sales dropped 6.5 percent on a monthly basis, but are still 3.2 percent higher than last year. The median price in the Midwest was $190,000, up 4.8 percent from a year ago.

All in all, it’s another month with the same story. Plenty of housing market strengths to be encouraged about, but the ongoing worry of lagging supply continues to temper the excitement.

With mortgage rates still absurdly low, it is still a great time to get out into that market and buy home. Just be prepared to make a few offers before you finally snag your perfect space.