In last 2 weeks, mortgage rates have jumped sharply. They are up 0.25% for most loan programs and the outlook is for something worse for the rest of 2015.

Day to day mortgage rates are decided by the movement of mortgage backed securities (MBS) as traded on the Wall Street.  The lower the price of MBS, the higher the mortgage rates to consumers.

MBS lost 74 basis points (bps) last week. See the image below. It had gone down in pricing the week before and this week has started with a loss. Combine all this and you are looking at .25% higher rate compared to 2 weeks back.

A quick look at all the top 4 banks’ 30 year fixed rates, will show rates over 4% with some origination fees.

See how Arcus Lending compares with the Top 4 when it comes to mortgage rates.

What’s Causing the Spike in Rates?

Comment From Fed: Fed chairperson Janet Yellen said last week that an interest rate hike is most likely if the economic data holds up. After the strong employment report (see details below), traders are now predicting a 70% chance of a Fed rate hike in December.

Employment Report: The October employment report came out way stronger than what the market was expecting. Usually good news for Economy is bad news for mortgage backed securities, which spikes the mortgage rates.

But the death knell to the rates was Average Hourly Wage Rates. That was double than what market expected and on an year-to-year basis it jumped 2.5%. 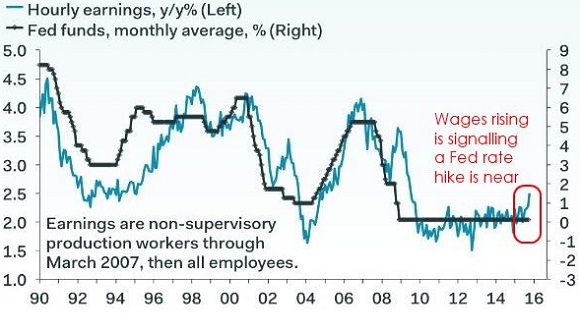 October employment report has all but made sure that the Fed will increase  rates in December. There can always be unforeseen global economic or political news that prevents the Fed from taking this action. But, as of now, the traders with 70% of chances probably have it right.

If you were thinking of Refinancing, it might just be your last chance to get the current rates if the Fed decided to increase the rates next month.

Request a Live Rate Quote customized for your situation

InstaMortgage, the fastest growing mortgage company in the country, announced that it will start offering a $715,000 conforming loan limit effective immediately. 2022 Conforming (Conventional) Loan Limit for a 1-unit property is only $647,200. InstaMortgage is predicting the 2023 loan limits will be higher and offering that loan limit to its borrowers now, even though […]