Usually good employment report in itself is bad enough for mortgage rates. Combine that with a rally in Oil and a statement from a regional Fed President and you have a perfect storm.

Employment Report – US added 257,000 jobs last month (much higher than the predicted number of 237,000). The November and December numbers were also revised up sharply. If that isn’t strong enough, the wages went up too – the average hourly wage of private sector workers rose 0.5% from December.

This is the greatest 3 month job gain in 17 years. Yes, you read that right – in SEVENTEEN years. 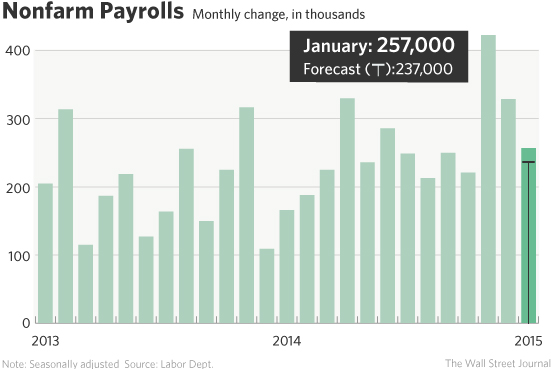 Oil Rally – Oil is also headed for the biggest 2-week rally since March 1998. There were concerns that continuous drop in Oil prices will ruin the US Economy and keep the inflation down.

In fact, the bond market is now projecting an annual inflation of 1.49% in next five years, up from 1.07% just a month ago.

Fed Announcement – Federal Reserve Bank of Atlanta President Dennis Lockhart said that he still believes US Central Bank is on track for raising rates in the 2nd half of the year.

Wall Street analysts are now predicting that Fed will proceed as early as this summer to increase the short term interest rates.

What This Means For Mortgage Rates – All three news is having a huge impact on mortgage rates. Usually good news for Economy, especially employment is bad news for Treasuries and Mortgage Bonds. And that results in higher mortgage rates. No surprise then, that the mortgage rates are soaring today with all lenders reporting a big spike in mid-day rates.

A Bloomberg Survey is predicting 10 Year Treasury to climb to 2.71% this year from 1.93% right now. That would mean mortgage rates climbing at a fast clip.