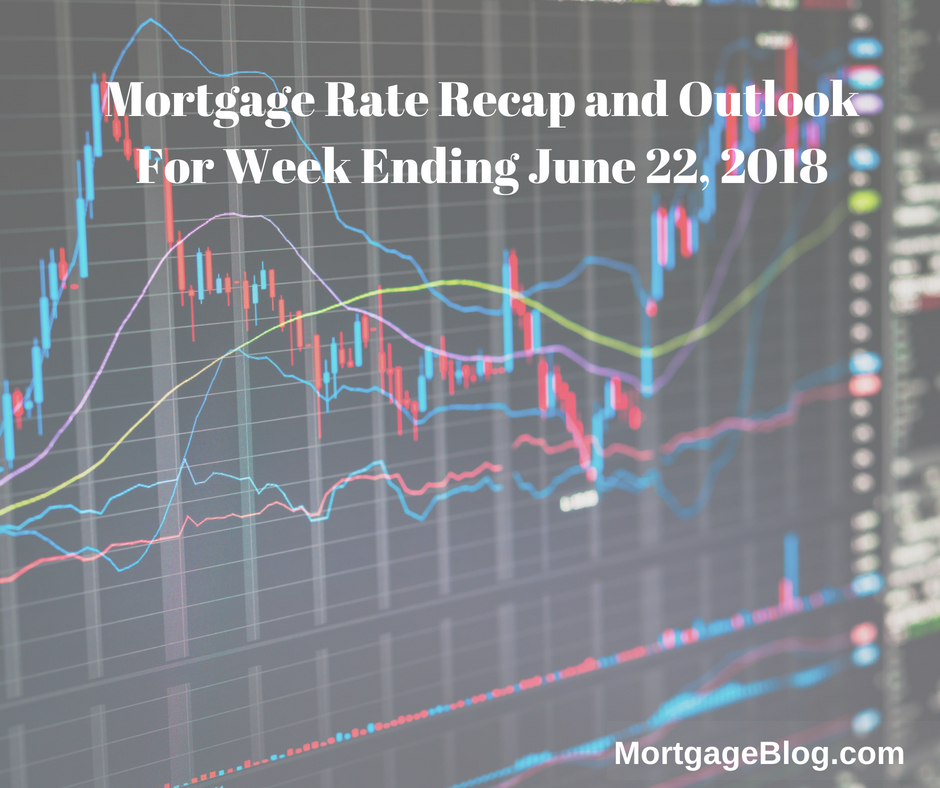 As of the end of April, the year-over-year (YOY) nationwide increase in home prices is at 6.4%, based on actual appraisals for all loans sold to Fannie Mae, Freddie Mac or Ginnie Mae (all conforming and government loans.) While it’s now almost the end of June, and the data is aged, it’s a positive sign from the standpoint that it’s not double-digit appreciation which might indicate a housing price bubble.

Overall, the markets have not held a lot of surprising data over the last week, with jobs and other economic indicators coming in at the levels we’ve seen for most of 2018. Federal Reserve Chairman Jerome Powell made it very clear this morning, June 21st, that Fed Funds rates will continue to be increased gradually for the remainder of 2018. He cited robust growth in the economy and a generational low in unemployment.

Trade continues to dominate the markets, and US tariffs are set to go into effect July 6th. Most impacted countries are announcing retaliatory tariffs against the US. The OPEC meeting is set to begin tomorrow, although it’s unclear what level of impact the outcome of the conference will have on mortgage-backed securities. For now, mortgage rates appear to be ‘treading water.’

This candlestick chart below covers the past weeks’ Mortgage Backed Securities (MBS) activity and the impact on interest rates. Overall, rates decreased slightly, as seen in the candlestick chart. MBS directly impact mortgage rates, and the days with red indicate higher and green lower rates. 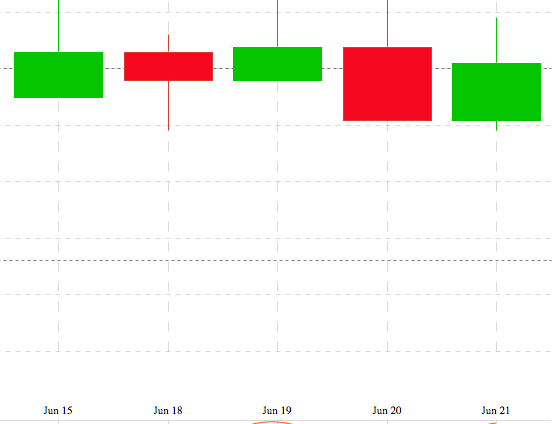 Per the MBA weekly survey: “The average contract interest rate for 30-year fixed-rate mortgages with conforming loan balances ($453,100 or less) remained unchanged at 4.83 percent, with points decreasing to 0.48 from 0.53 (including the origination fee.

“The average contract interest rate for 30-year fixed-rate mortgages with jumbo loan balances (greater than $453,100) increased to 4.79 percent from 4.74 percent, with points decreasing to 0.36 from 0.37 (including the origination fee.)”

“The average contract interest rate for 15-year fixed-rate mortgages increased to 4.27 percent from 4.23 percent, with points increasing to 0.53 from 0.51 (including the origination fee.)”

“The average contract interest rate for 5/1 ARMs decreased to 4.06 percent from 4.11 percent, with points decreasing to 0.54 from 0.56 (including the origination fee.)”

Bankrate’s weekly survey of mortgage and economic experts, countrywide, shows the majority split with 38% predicting interest rates will fall this coming week (plus or minus two basis points), and 38% predicting they will increase. The remaining 23%, however, expect interest rates to remain unchanged next week.

The chart below, from Freddie Mac’s weekly mortgage survey, shows conforming rates either decreased slightly or remained unchanged over the last week, June 14th to June 21st, for 30Y fixed, 15Y fixed and the 5/1 ARM. 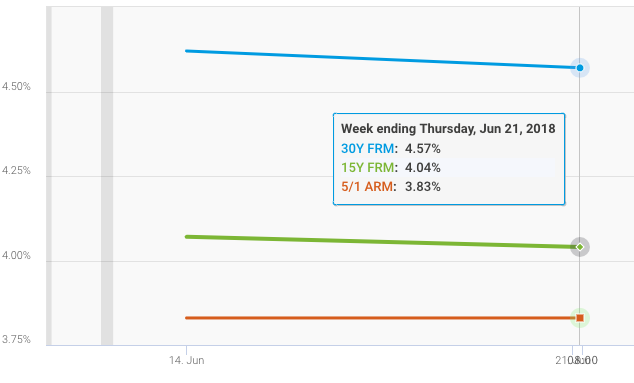 In Freddie Mac’s weekly mortgage survey it noted that “Mortgage rates inched back over the past week and have now declined in three of the past four weeks.

After a sharp run-up in the early part of 2018, mortgage rates have stabilized over the last three months, with only a modest uptick since March. However, existing-home sales have hit a wall, declining in six of the last nine months on a year-over-year basis.

This indicates that persistently low supply levels, and not this year’s climb in mortgage rates, are handcuffing sales – especially at the lower end of the market. Home shoppers can’t buy inventory that doesn’t exist.

Highly recommend locking in a rate now if you are purchasing or refinancing. Any number of economic triggers could continue to move interest rates higher and today’s levels will look like a bargain.