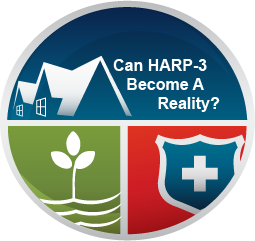 Its been a stop-and-go for the new and improved Home Affordable Refinancing Program 3.0 (also called HARP 3). Towards of the end of last year the launch seemed to have gained momentum. But nothing seem to have happened in last month or so.

Nearly 1.8 million borrowers have taken advantage of the Home Affordable Refinancing Program (HARP, also called HARP 2) for mortgages backed by government-owned Fannie Mae and Freddie Mac since it began in 2009. The new plan loosely called HARP 3 would create a similar avenue for an estimated 930,000 borrowers whose loans are in private-label securities and who are current on their payments, according to the proposal outlined last year.

The proposal called for creating a federal trust to buy or guarantee mortgages, enabling borrowers otherwise ineligible for refinancing to obtain new loans with terms of either 15 or 30 years at lower rates.

In his state of union speech last month, President Obama again called for legislation that would allow struggling homeowners to refinance their home. He was referring to homeowners whose loan is not backed by Fannie Mae, Freddie Mac or FHA.

Even with mortgage rates near a 50-year low, too many families with solid credit who want to buy a home are being rejected, Obama said. “Too many families who have never missed a payment and want to refinance are being told no. That’s holding our entire economy back, and we need to fix it.

All these proposals are still in the works. I am not sure if it would ever become a reality. One thing you can be sure of, is that I will keep you posted on any progress on HARP 3 and/or changes to HARP 2.

In the meanwhile, get on the HARP 3 anticipation list for California and Washington homeowners