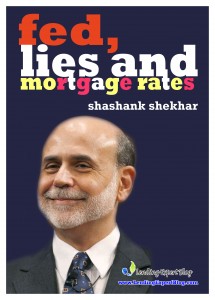 There have been a string of striking turnabouts by Fed officials in recent months that have whipsawed mortgage backed securities (MBS) markets.

Who Said What and the Impact on Mortgage Rates

May 22, 2013 – Federal Reserve Chairman Ben Bernanke answered Congress’s questions about when the central bank might begin to slow down its monetary stimulus program,  “If we see continued improvement and we have confidence that that is going to be sustained, then we could in the next few meetings we could take a step down in our pace of purchases, he told the Joint Economic Committee.

Impact on Mortgage Rates – That news caused the biggest single day and single week increase in mortgage rates in history. Rates jumped to two-year high in 8 weeks period after that comment from Mr. Bernanke.

September 18, 2013 – With the market fully expecting the Fed to taper the bond purchase, Fed did an about-turn and decided not to. Here is what they said. “The tightening of financial conditions observed in recent months, if sustained, could slow the pace of improvement in the economy and labor market,” the Fed said in a statement after the meeting. “The Fed decided to await more evidence that progress will be sustained before adjusting the pace of its purchases.”

Impact on Mortgage Rates – The MBS market reacted positively and improved by over 100 basis points. When MBS pricing improves, mortgage rates go down. Since that decision on September 18th, mortgage rates have climbed down by more than 0.25% according to Freddie Mac weekly mortgage rate survey. But at 4.22%, its still almost 0.75% higher than in May 2013. If Bernanke would not have made the statement at the Joint Economic Committee, most likely we would still see the rate in mid 3s.

The Conundrum of Unemployment Rate and Bond Purchase

The labor market has been among the most confusing aspects of the economy for Fed officials. Even with a slower employment growth this summer, the unemployment rate has fallen since the Fed launched its $85 billion a month bond-buying program last year to 7.3% in August from 8.1%. One reason for the drop is people who have stopped looking for employment or who are under-employed.

In June, Mr. Bernanke said at a press conference that officials expected the jobless rate to be around 7% when the Fed ended its monthly bond buying program. He made no mention of that 7% marker in his statement on September 18 and played it down when asked about it. “There is not any magic number that we are shooting for,” Mr. Bernanke said. “We’re looking for overall improvement in the labor market.”

What happens from here?

With so many twists in the economy landscape, its almost impossible to predict the future. The government shutdown has added more complexity to an already confusing picture. Heck, if the Fed Chairman himself doesn’t know, how would we the lesser mortals have any idea.

Fed may still taper the bond purchase in December. In fact Mr. Bernanke did mention at the press conference that he could still do that. However, he wants more confirmation of sustained job gain, economic growth and higher inflation. I am not sure if that is going to happen anytime soon. No wonder, he didn’t commit to anything (again) saying “we don’t have a fixed calendar schedule.”

The December Fed meeting is expected to be Bernanke’s last. His term ends on January 31, 2014. Fed Vice Chair Janet Yellen is the frontrunner for the position. May be Bernanke would take the easy way out and leave it to the new Chairman to take the tougher decisions.

Till such time we have any clarity, expect the MBS markets and hence the mortgage rates to be very volatile. And keep watching this space for updates.