2009 – 2012 will likely be remembered as the Great Recession by historians. Many homebuyers will recall it more fondly; they will remember it as the time they ignored the media cynicism, seized the opportunity and bought a home – A home that was a steal of a deal and paired with once in a lifetime mortgage rates to boot.

Most of the intrepid adventurers who braved the skeptics and bought real estate at the bottom stand to profit a pretty penny on the choice.

The quote above encapsulates the thinking of many home-buyers who were bold enough to buy when almost everyone else advised against it.

Just like those who ignored the tsunami of housing affordability that occurred between 2009 – 2012, many new entries into the real estate market are still locked into a mindset that is no longer applicable.

A recent survey by Redfin, Seattle-based real estate company, found some substantial disconnects between buyers, sellers, and market reality. They are, the company said, not on the same page when it comes to the state of the housing market.

Not only are some buyers and sellers “not on the same page,” many are reading an entirely different book altogether.

While inventories have increased and mortgage rates remained low, buyers are still hesitating to pull the trigger. Some don’t have access to credit due to Great Recession transgression, others live in markets where housing affordability factors have made owning barely accessible to the middle class, and still others remain on the sideline due to market cynicism. 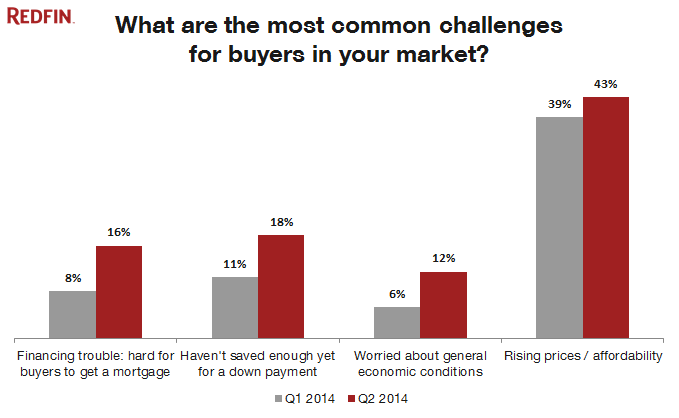 With that said there are still plenty of buyers on the hunt. Sellers, on the other hand, are reliving stories of 2013 when housing inventory reached scarcity levels rarely seen.

The reality of the September 2014 housing market lies somewhere in between the affordability avalanche that occurred during the Great Recession and the great inventory shortage of 2013.

Redfin interviewed 707 of their agents and associates spread across 35 U.S. markets in late June about the attitudes and behaviors they see in their dual clientele. Just 24 percent of agents told the company that “sellers have all the power” in their markets, down from 35 percent three months ago. 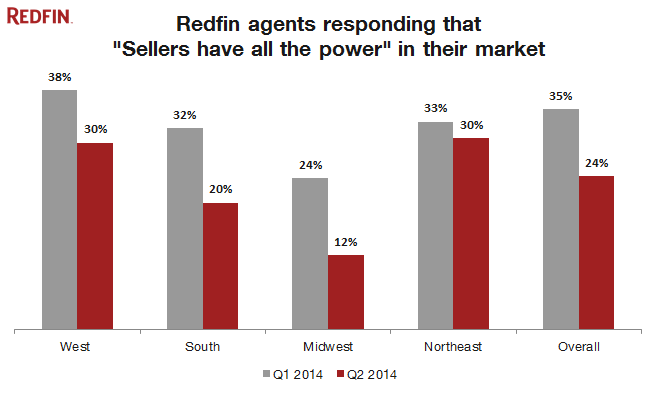 While the trend in the sentiment was similar nationwide, there were regional differences in the degree. In the upper Midwest only 12 percent of agents think sellers are in charge, half of the level in the first quarter of 2013. In the West and Northeast 30 percent of respondents said it was a sellers’ market, down 8 and 3 percentage points respectively.

Redfin Chief Economist Nela Richardson said sellers appeared to have not yet grasped the change. “In May, 40 percent of sellers surveyed by Redfin said that they planned to list their homes above market value even though home sales had dropped by 9 percent since the year before.”

Many researchers seem to feel that young people born between the early 1980s and the early 2000s, the so-called Millennial Generation, are the key to making or breaking the housing market.

Redfin asked its agents to describe this group’s home buying approach. The words and phrases most commonly uttered in the responses included “cautious,” “tech-savvy” and “well-informed.”

Though responses varied, many said that millennial buyers were interested in homes with less maintenance, and were willing to sacrifice square footage to be closer to work and their friends. The flight from Suburbia is already underway, but the Millennials just may blow up the bridge on their way out.

The two-car garage, white picket fence suburban sprawl era home is not what the younger generation wants. The Millennial attitude toward housing is increasingly rubbing off on their parents – the Baby Boomers – as well.

The Boomers are healthier and more diverse than their parents’ generation. They no longer desire the maintenance involved with a large suburban house, the expense of heating and cooling unused square footage or the endless commutes to get them to their energy and time-sucking McMansion.

While the Great Recession trapped a substantial amount of the Boomer demographic in their current homes for the time being – underwater & unable to sell due to negative equity – the ones who can move are more frequently following their children (and grandchildren) into sustainable, walkable and transit-oriented urban neighborhoods.

Both buyers and sellers need to understand the demographics and market supply and demand before making their way into the market. Those fundamentals, along with exactly how much you can afford, require quality guidance.