Last week I was asked several times about Mortgage Rates, The Trends and my Predictions of where it was moving. All this I guess was triggered by the Freddie Mac Primary Mortgage Market Survey, which found that the 30-year fixed-rate mortgage (FRM) and the 15-year (FRM) rose dramatically last week, as did the 5-year ARM.

Per Freddie Mac California 30-year fixed-rate mortgage (FRM) averaged 4.39 percent with an average 0.9 point for the week ending November 18, 2010, up from last week when it averaged 4.17 percent. 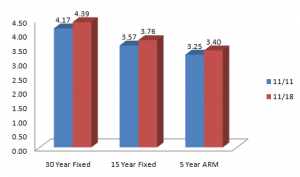 What caused the Mortgage Rates to jump so sharply?

Since the Fed’s announcement of Quantitative Easing in September, California Mortgage Rates have been going down expecting the Fed to buy more of 10 Year Note and 20 and 30 year Bonds. These long term securities directly impact mortgage rates. However, when the Fed actually started to buy treasuries it was mostly the low end of securities i.e. 3 and 5 year treasuries. They also announced that their priority at this time is to increase inflation, which is usually an enemy of good mortgage rates. A combination of two, China’s downgrade of US Government debt and better than expected economic news got the investors to dump treasuries. All this causing California Mortgage interest rates to jump sharply.

The outlook still remains negative for interest rates but as I have noted on more than a few occasions I am not expecting US interest rates to continue to climb much more. In the long run, yes, rates are likely to escalate, however in the near term expect the bond and mortgage markets to consolidate at or near the present levels. Don’t look for rates to decline back to the lows we had two months ago; we believe the lows in rates have already been achieved. This week being a shorten one expect markets to remain bearish but quiet.

If you were considering Refinancing, the best mortgage rates may already be behind us. But the rates are still at one of their lowest levels in the history. It will only take a minute give me a quick call at 408.615.0655 so we can look at your situation. Don’t miss this closing window of opportunity to save significantly on your monthly budget. What better gift to give yourself…and just in time for the holidays!

Shashank Shekhar is a best-selling author and the CEO of InstaMortgage (dba Arcus Lending Inc), offering mortgage loans for home purchase and refinance. For a free consultation and/or rate quote, email him at [email protected] or call his office at 1-855-644-LOAN