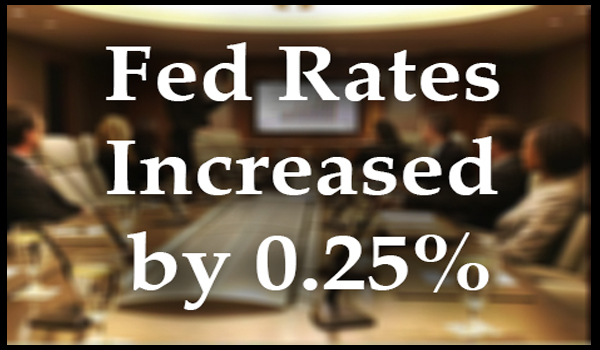 The Federal Open Market Committee – also known as the Federal Reserve or just the “FED” –  makes big decisions that impact the future of the American (and even the world) economy.

The FOMC meets eight times annually on a pre-determined schedule, and on an emergency basis, when needed (like in 2008).

What they say matters. They move markets of all kinds with their actions and also their words. This time it was their action that made the headlines.

For the first time in nearly a decade, the FED moved their primary interest rate – the Fed Funds Rate. Increasing the rate by a quarter of a point is a move that will affect interest rates on many types of debt and the economy in general.

Does that mean mortgage rates went up too? If not how will the mortgage market be affected?

It’s a common belief that the Federal Reserve “makes” consumer mortgage rates. It doesn’t. Mortgage rates are made on Wall Street.

The Federal Reserve has no direct connection to U.S. mortgage rates whatsoever. The FED adjusts something called the “Fed Funds Rate”.

The “Fed Funds Rate” is the prescribed rate at which banks lend money to each other on an overnight basis.

When the Fed raises short-term rates – the rates that banks used when lending to each other for liquidity purposes –  the effects will reverberate throughout the economy.

Everything from Home Equity loans to auto loans and credit cards will feel the effects of the quarter point (.25%) increase directly. Anything based on prime rate or with a variable rate will immediately get hit by the increase.

Mortgage rates will not, at least not directly at least.

Despite the lack of a direct correlation, the Fed does exert a strong influence on today’s mortgage rates.

Mortgage-backed securities are openly and actively traded every day. Supply and demand forces in the market actually set your mortgage rate.

The Federal Reserve can affect today’s mortgage rates, but it cannot set them. Wall Street has that job.

It had been nearly a decade since the Federal Reserve used their power to manipulate short-term interest rates. It is anticipated that this will not be the last time the rate moves up.

In 2016, with the economy doing well and job growth improving, many Economists believe this rate increase is the first of three – possibly four – rate increases we can expect to see in the next year or two.

The Fed is expected to raise rates modestly and gradually, wanting to ensure the economic upturn is sustainable and making sure that inflation stays in check.

The link between inflation rates and mortgage rates is direct and it is real. Ask any American that purchased a home in the 1980’s and they’ll vividly remember the aftermath of inflation on mortgage rates.

Sky high inflation rates led to equally sky high mortgage rates. Rates that would be unheard of for younger homebuyers.

30-year mortgage rates went for over 17 percent (as an entire generation of borrowers will remind you); and 15-year loans weren’t much better.

So, the key is to watch inflation.

Inflation is an economic term describing the loss of purchasing power. When inflation is present within an economy, more of the same currency is required to purchase the same number of goods.

Inflation eats into your savings too. If you are holding assets in a bank account that yields 2% and inflation is at 3%, you are losing money every single day.

This means that a devaluation in the U.S. dollar will result in the devaluation of U.S. mortgage-backed securities as well.

When inflation is present in the economy, then, the value of a mortgage backed securities drop, which leads to higher mortgage rates. Inflation also eats into gains that a 30 year mortgage would typically provide to the lender.

If your mortgage is 5% and inflation is 3% the mortgage lender who lent that money is watching their profits for the next 30 years disappear into a dust cloud of inflationary pressure.

Regardless, mortgage rates remain stellar despite the Fed increase and are projected to stay attractive through the first part of 2016 at least. That said, keep your eyes on the Fed if you plan to buy because they can make the process significantly more expensive for you.