Mortgage Bankers Association (MBA) is now predicting that the mortgage origination volume for 2012 can exceed $1.7 trillion. This is almost double of what they predicted before the year began – a meager $900 billion. Quarterly Data Report and The National Mortgage News are forecasting $1.75 trillion in fundings this year, 70% of which will be refinancing. Last year mortgage bankers funded $1.436 trillion. See the historical and projected production in the chart below (source MBA) 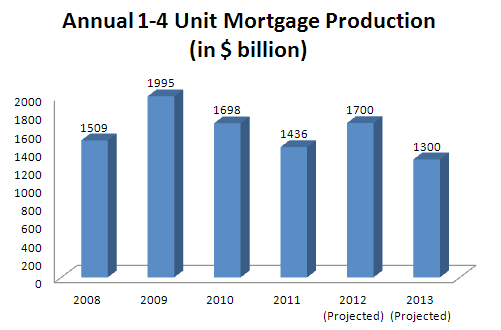 “We expected 2012 originations to be front-loaded in the first half of the year, with refis falling off with rate increases.  Instead we saw the refinance market grow during the year due to a combination of low rates, thanks to QE3 and slowing global growth because of continuing problems in Europe, and adjustments in the HARP and FHA refinance programs, said Jay Brinkmann, MBA Chief Economist. “We expect 2013 refinance originations to play out like our original expectations for 2012, with a long tail of refis extending through the first half of the year followed by a rapid drop-off in the second half.

Forecast for 2013 – MBA is forecasting a total production of $1.3 trillion for 2013. Though refinance business is expected to be much lower than 2012, purchase loan origination is expected to increase 16 percent over 2012. MBA also believes that 30 year fixed mortgage rates will stay below 4% through the middle of 2013.