Some old influences on the long-term bond market worked to slightly lower rates this week, as fear of geopolitical events sparked a move of institutional money into the safety of the long-term bonds. Specifically – the negative talk from North Korea’s leader and officials and the cancelation of the summit next month with the US brought back the fear factor that had influenced the market a couple of months ago.

On top of that, the Mortgage-Backed Securities markets benefited from a more dovish stance from the Federal Reserve based on concerns about trade wars/tariffs, the growing deficit, and wage pressure. The Fed also expressed a willingness to let inflation continue to float above their target of 2% without feeling pressure to take action to tether it to that level.

Another data point to take note of is the drop in sales of existing homes. This is entirely due to extremely low inventory nationwide and not due to mortgage rate increases.

Get a Live Rate Quote for your Next Mortgage

This candlestick chart below covers this weeks’ Mortgage Backed Securities (MBS) activity and the impact on interest rates. This past week, it’s all green which translated to slightly lower rates. MBS directly impact mortgage rates, and the days with red indicate higher and green lower rates. 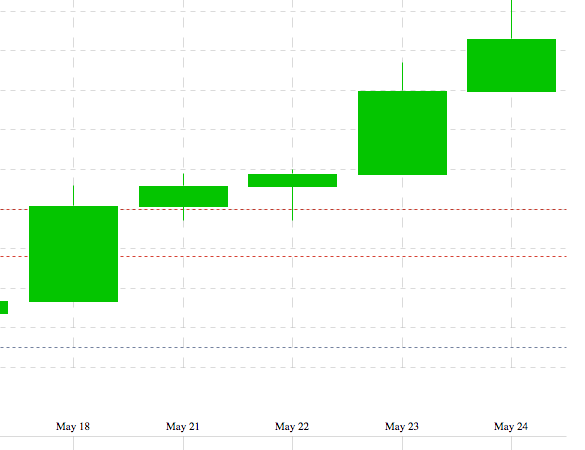 However, this week’s Mortgage Banking Associations’ (MBA) weekly rate survey shows effective rates increased slightly, for all but the 5/1 ARM, for loans with an 80% loan-to-value.

Per the MBA weekly survey: “The average contract interest rate for 30-year fixed-rate mortgages with conforming loan balances ($453,100 or less) increased to its highest level since April 2011, 4.86 percent, from 4.77 percent, with points increasing to 0.52 from 0.50 (including the origination fee.)”

“The average contract interest rate for 30-year fixed-rate mortgages with jumbo loan balances (greater than $453,100) increased to its highest level since September 2013, 4.81 percent from 4.73 percent, with points increasing to 0.42 from 0.35 (including the origination fee.)”

“The average contract interest rate for 15-year fixed-rate mortgages increased to its highest level since February 2011, 4.31 percent from 4.20 percent, with points increasing to 0.56 from 0.53 (including the origination fee.)”

“The average contract interest rate for 5/1 ARMs increased to its highest level in the history of the survey, 4.12 percent from 4.09 percent, with points decreasing to 0.46 from 0.56 (including the origination fee.)”

Get a Customized Rate Quote for Home Purchase or Refinance

Bankrate’s weekly survey of mortgage and economic experts, countrywide, shows a majority (45%) predicting interest rates will increase this coming week (plus or minus two basis points), while the remaining group is split with 27% predicting that rates will remain unchanged, and 27% see them falling next week.

The chart below, from Freddie Mac’s weekly mortgage survey, shows conforming rates increasing from over the last week, May 18th to May 24th, for 30Y fixed, 15Y fixed and the 5/1 ARM.

In Freddie Mac’s weekly mortgage survey it was noted that “Mortgage rates so far in 2018 have had the most sustained increase to start the year in over 40 years. Through May, rates have risen in 15 out of the first 21 weeks (71 percent), which is the highest share since Freddie Mac began tracking this data for a full year in 1972.”

My prediction for rates this week, as quoted in the Bankrate report, “After touching a seven-year high, mortgage rates expectedly went down a tad last week. However, there is no reason for that downward trend to continue to anything significant. The Fed is still expected to raise the rate again in June with odds currently split between the probabilities for three or four increases for the year as a whole. With no major policy change expected from Fed and a short week because of Memorial Day, should mean a mostly stable market with mortgage rates not changing much for the week.”

Should I Float or Lock My Mortgage Rate?

Recommend locking in a rate now if you are purchasing or refinancing. The impact of geopolitical events on mortgage rates is impossible to predict and even with the past week’s slight improvement, rates saw little impact.  Certainly not enough to risk floating.

Check what Mortgage Rate You Qualify for