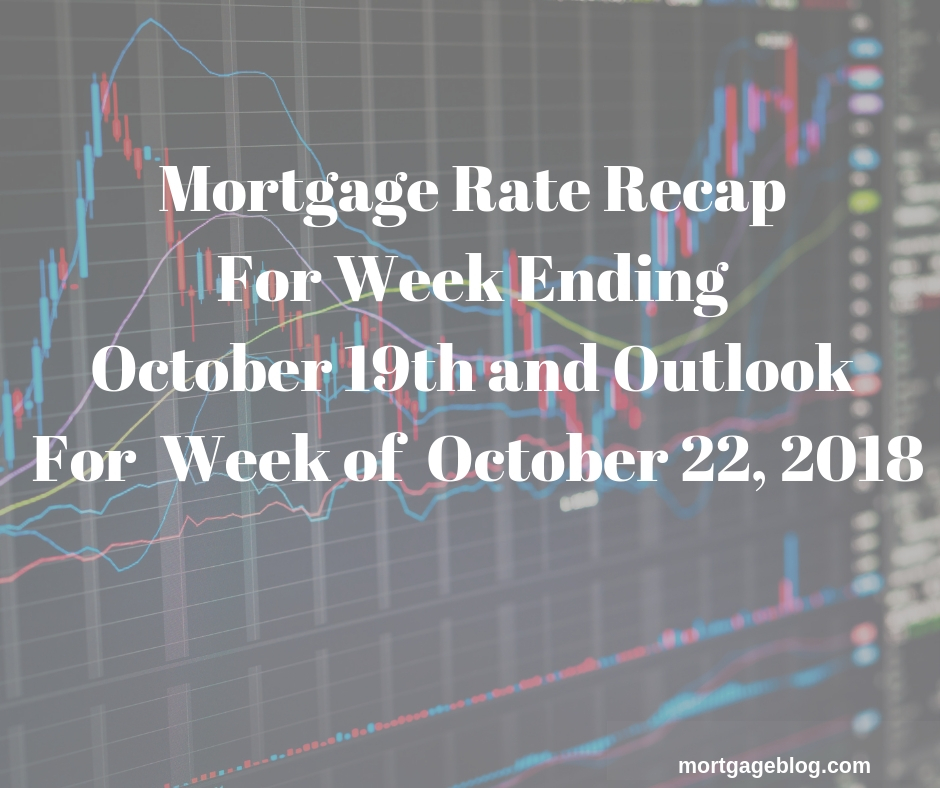 The overview for the week is that housing markets are weakening, growth in wages continues to be below expectations, and Saudi Arabia is in a negative spotlight over the killing of a critic of the Saudi Crown Prince. The stock market is experiencing significant volatility, which saw a gain of 547 points in the DJIA on Tuesday (half of the prior week’s loss), but losses on Wednesday and today total 14 points more than the gain on Tuesday. So on top of last weeks -1007, the DJIA is down another 65 points so far this week.

All that equals volatility in the stock market that’s beginning to creep into the rate markets, and the pace of the “swings” is increasing.

The job markets continued strength has brought comments and speculation from former Fed Chairman Alan Greenspan who noted this is the tightest job market he’s seen. He further predicted the 50-year low in the unemployment rate and the number of job openings will force wages to increase and inflation to rise.

This candlestick chart below covers the past weeks’ Mortgage Backed Securities (MBS) activity and the impact on interest rates. MBS were at 102.54 at the close on Oct 11th and closed trading at 102.35 October 18th. MBS directly impact mortgage rates, and the days with red indicate higher rates and those with green – lower rates. 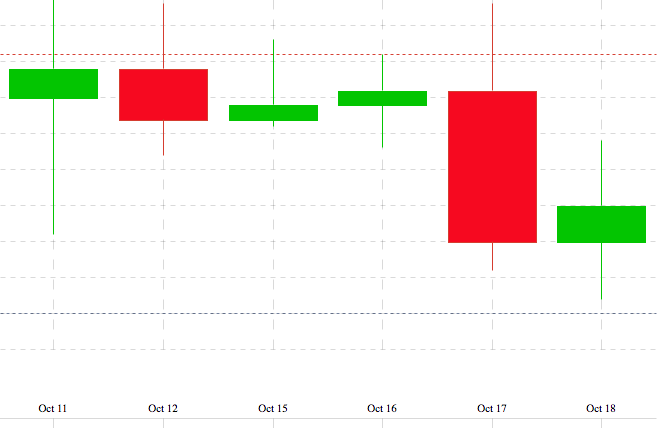 This week’s Mortgage Banking Associations’ (MBA) weekly rate survey shows effective rates increased for all loan products, with the exception of the 30-year fixed Jumbo which showed a slight decrease. The information below applies to all loans with an 80% loan-to-value.

Per the MBA weekly survey: “The average contract interest rate for 30-year fixed-rate mortgages with conforming loan balances ($453,100 or less) increased to its highest level since February 2011, 5.10 percent, from 5.05 percent, with points increasing to 0.55 from 0.51 (including the origination fee.)”

“The average contract interest rate for 30-year fixed-rate mortgages with jumbo loan balances (greater than $453,100) decreased to 4.98 percent from 4.99 percent, with points decreasing to 0.34 from 0.35 (including the origination fee.)”

“The average contract interest rate for 15-year fixed-rate mortgages increased to its highest level since February 2011, 4.50 percent, from 4.44 percent, with points decreasing to 0.54 from 0.58 (including the origination fee.)”

“The average contract interest rate for 5/1 ARMs increased to its highest level since the series began in 2011, 4.34 percent, from 4.29 percent, with points decreasing to 0.35 from 0.52 (including the origination fee.)”

My prediction is that rates will remain unchanged this week, as quoted in the Bankrate report, “After rising to a seven-year high ~two weeks back, mortgage rates have remained mostly stable. The meeting minutes from the Federal Open Market Committee (FOMC) didn’t contain any surprises. There is no other major economic event or announcements that can have a significant impact on the rates. Also, after the sudden steep hike in late September/early October, the markets should pause for a week or so. Put all that together and we might just have a quiet week on the mortgage rates front.”

The chart below, from Freddie Mac’s weekly mortgage survey, shows conforming rates had a very slight decline for the week of October 11th to October 18th, for 30Y fixed and 15Y fixed. 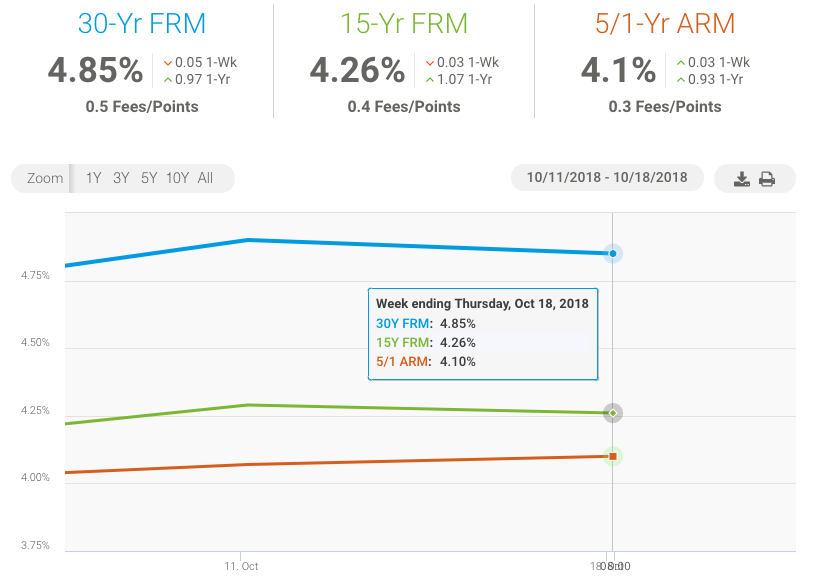 Freddie Mac’s weekly mortgage survey noted, “The modest decline in mortgage rates is a welcome respite from the rapid increase in rates the last few weeks. While the housing market has clearly softened in reaction to the rise in mortgage rates, the economy and consumer sentiment remain very robust and that will sustain purchase demand, particularly in affordable markets and neighborhoods.“

While rates have now hit seven-year highs, the majority of mortgage experts surveyed expect a short pause in interest rate increases. However, with rates expected to remain stable for the short term, that doesn’t provide any incentive to floating, and the risk of rates increasing is always present in a volatile market. The best advice is to lock in an interest rate as soon as possible whether you’re closing a loan in the next 15 to 60 days.