Mortgage Rates Recap and Outlook For the Week Ending April 27, 2018

30 Year Fixed Mortgage rates for Conforming Loans (Loan Amount $453,100 and below) climbed to the highest levels since September 2013.

Because of the rapidly rising rate, the refinance share of mortgage activity decreased to 37.2 percent of total applications, the lowest level since September 2008.

Get a Live Rate Quote for Refinance or Home Purchase

All of this was reported by Mortgage Banker’s Association (MBA) in their latest weekly survey.

Let’s look at the exact numbers as reported by MBA. Note that these rates are for 1-unit, Primary Residence with 20% Down Payment.

The average interest rate for 30-year fixed-rate mortgages with conforming loan balances increased to 4.73 percent, with points increasing to 0.49.

Get a Fixed or ARM Rate Quote

Some of the biggest banks are quoting rates even higher than the MBA survey. Take a look at this screenshot from Wells Fargo’s rates for today. 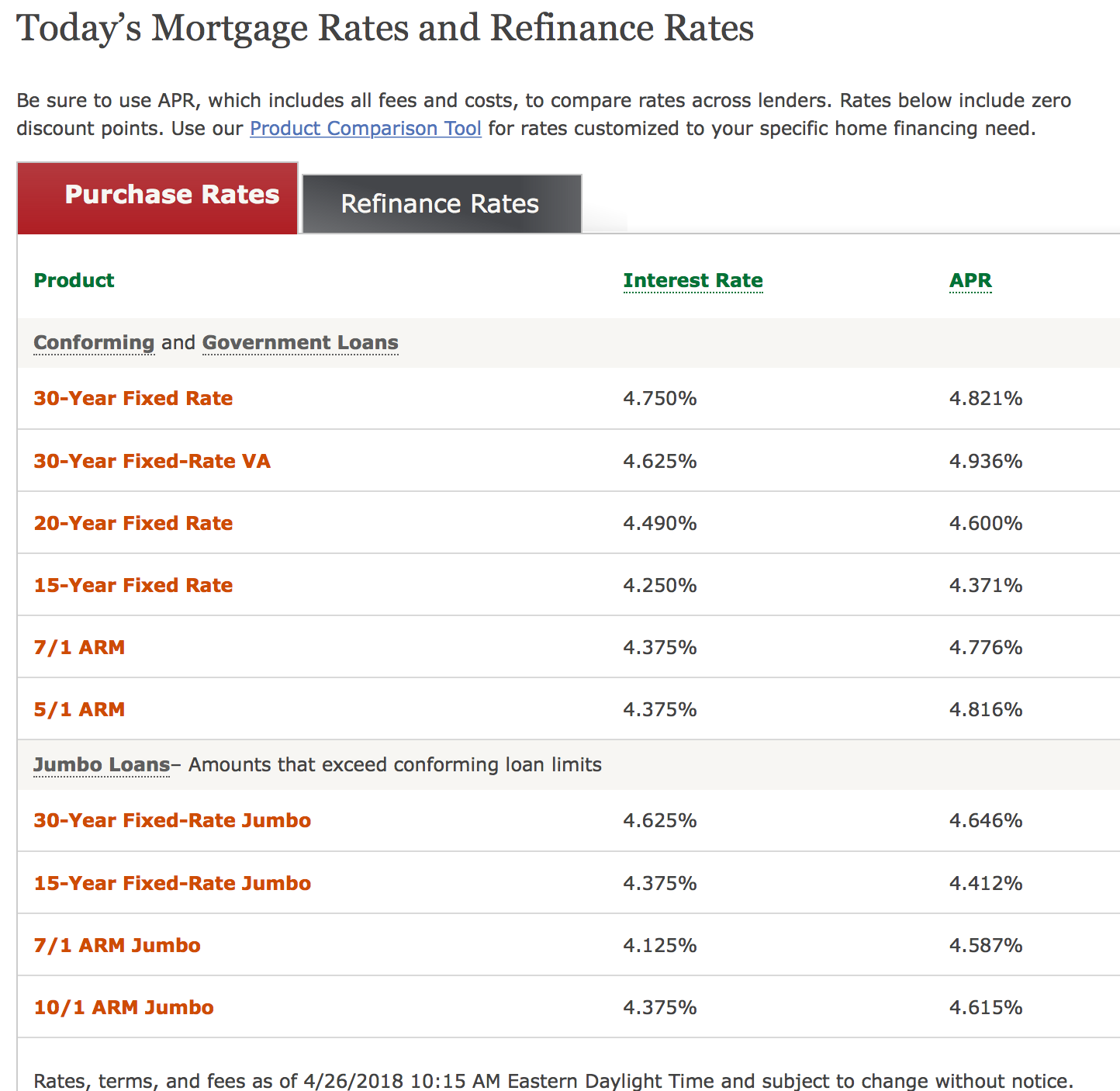 We might see a small correction this week, but the overall trend looks ominous. See my quote in The Washington Post Article.

At the beginning of 2018, most Government Agencies and Industry Associations (like MBA) were forecasting a 5% rate towards the end of the year or even in 2019. At this stage, it seems we might see that as early as this Summer.

Just goes on to show predicting mortgage rates is not easy even for the best economists and pundits in the country.

If you were planning to get a mortgage whether to buy a home or refinance – I will repeat what I have been saying all year long – get it as soon as you can. Else, you will more likely be paying a higher interest rate as the year goes by.

A mortgage rate increase of up to 1% typically has a very little impact on real estate prices for homes bought for the purpose of Primary Residence. In fact, rising interest rate scenario may even get some buyers off the fence, thus increasing the demand.

If the rate touches 5% for 30 Year Fixed the first impact will be seen with investors buying rental properties for cash flow. Higher mortgage rates mean higher monthly payments and lower cash flow. That might dissuade some investors from pursuing to buy real estate and possibly look at other assets to invest in.

Bottom line – Whether you are looking to get a mortgage for a primary residence or an investment property, do it now rather than later.