2015 was an eventful year in the housing market. Plagued by lack of inventory, housing markets did what they could to keep up with the demand as rates defied prognosticators and stayed near historically lows throughout the year.

Rents increased far beyond normal, stretching affordability in the rental market. Those increase will force some decisions to be made in 2016 amongst non-committal millennials and boomerang buyers who were biding their time before re-entering the market.

#1 – Expect a wave of Boomerang Buyers to return to ownership
During the Great Recession and housing crash, nearly 7 million Americans lost their homes due to foreclosure or distressed sale. Most have remained on the sidelines despite the fact many are able to now meet underwriting guidelines and re-enter the home ownership arena.

Expect an influx of rental refugees to return to the realm of ownership and to finally re-enter the market in 2016.

# 2 – First-time buyers decide to jump into the housing market
The overall percentage of first-time buyers has remained historically low since the crash. Sitting around 30% of all purchase, first-time buyers traditionally represent closer to 34% and we expect that share to normalize over the next couple years.

The consensus among experts has been that millennials would stimulate the housing sector. A majority of those born roughly 30 years ago are starting to realize their financial aspirations, and simultaneously entering their peak homebuyer age.

Although that has yet to come to fruition, it is still expected to trend in 2016. With rising rents stretching rental affordability, Millennials will have more pressure to make a long-term housing commitment this year. More and more will choose to own in 2016.

#3 – Builders start to catch-up to housing inventory demands
Even though there are signs of life in new construction, much of the new building will be focused on rentals, at least initially. Less than two-thirds of new construction is targeted for single-family homes, despite growing demand for affordable homes by next year’s buyers.
Expect the number of single-family homes starts to increase by the summer 2016 building season. The only question is will those homes be ready for homebuyers before we make our 2017 predictions.

#4 – The Fed continues to tighten the screws
With the economy on the move and trending upward, the Fed will continue to raise the Fed Funds Rate in 2016.

Expect at least 2 quarter point increases with as many as 4 being possible. Of course, a large scale terror attack or an escalation of the conflict in Syria could put the brakes on those increases. That said, expect to see at least some upward movement in 2016 regardless of external factors.

#5 – Mortgage rates finally start to return to historical norms
With the Fed tightening, expect mortgage rates to slowly follow that lead. In all likelihood, rates will remain in the mid 4’s through 2016, but the possibility is certainly there for them to approach 5% by the end of the year. 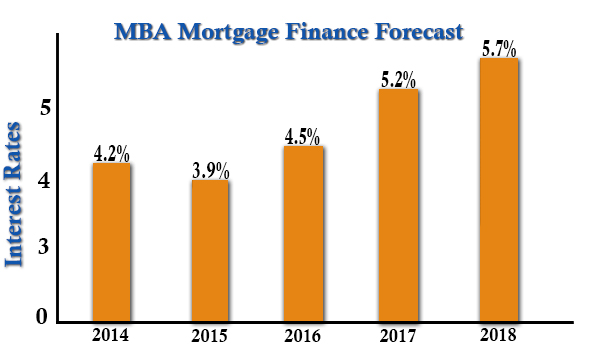 #6 – Slower market and longer closings
The 2015 housing market was the fastest we’ve seen at Redfin. From January to October, the typical home was on the market for 36 days, four days faster than the same period in 2014. Do not expect that in 2016.

The new mortgage disclosure rules – TRID – have already slowed the market. The average application to closing time frame has jumped from 36 to 50 days as of December 2015. (These approximate closing dates are national averages; Arcus Lending is still closing most loans in under 30 days)

As mortgage lenders work through the TRID related kinks, that number should drop. However, it will not go back to the 36 days we saw earlier in the year. Expect the time to closing window to fall in around 43 or 44 days by summer 2016.